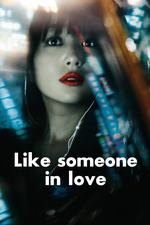 Not that Kiarostami's ever been a "Hello, here is your narrative" kind of guy, but Like Someone In Love's especially perverse in terms of foregrounding non-essential narrative information. Phones ring and lead to useless, annoying conversations; as a taxi circles a train station plaza so Akiko (Rin Takanashi) can catch a glimpse of her grandmother, a van pulls into the POV shot and inches along with maddening consistency, persistently blocking a view of the old lady. The opening sequence is just shot-countershot, but you spend the whole first shot trying to figure out who's speaking, only gradually determining that the voice you're hearing isn't attached to anyone you see but someone behind the camera, or maybe somewhere else entirely. Mise-en-scene can be altered entirely by the addition or subtraction of bodies in the first shot, while Akiko sits alone in hers, a momentary spectator with no agency waiting to have her gaze directed.

The rush of unnecessary detail is both perversely scintillating in its own right — just trying to figure out why what was on-screen was there made my brain hurt — but the essential information is already present in the first scene, where Akiko's forced by her pimp, against her will, to take on a prostitution gig on a night when she'd rather see her grandmother and study for her sociology exam. (Cf. Liquid Sky: "Seems to me that too many men today are telling me what I want.") Patriarchy and oppression's not a new subject for Kiarostami, obviously, but locating its particular manifestation in a new society has produced an obdurate new form.

For a guy who's built so much of his career on long driving sequences, it's hilarious that the hour-long journey from Tokyo to wherever the professor lives (didn't catch the name) is almost entirely elided, with Akiko and the film sleeping through much of the trek; the film builds to a climax through automotive dysfunction. In a parking garage, the professor meets a student from 30 years ago, who's "interested in violence in society" (Thesis Alert, protests Keith Uhlich, but at least the guy didn't say "the patriarchy in society") and was once a cop but now he's "freelance" (in what? Viewing companion adroitly suggested he's a hitman, since he's apparently a regular at the garage for mysterious dents in his car).

"Now that Kiarostami has made a movie with a jump scare, anything is possible," Eric Kohn tweeted from Cannes. Like The Wedding Suit or Taste Of Cherry, Like Someone In Love can go from zero to excruciatingly suspenseful in 5 seconds with zero advance notice. The threat of something horrid happening throughout — especially when the prof's at the wheel, going into reverse while seemingly unaware of little kids behind the vehicle or nodding off at a red light — is finally delivered upon. This is effectively a movie that wonders about a society in which an abusive fiance can "confront," with barely suppressed violence and much arm-grabbing and yelling, his would-be future wife in a wide open public area and not merit a glance, let alone an intervention.