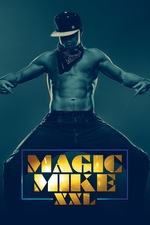 Magic Mike XXL is a putatively "modest"/"small" film — $14.8 million budget, 28-day shooting schedule, a shambling road movie meant to showcase extended musical numbers and largely excising the first film's recessionary panic. (Business is discussed, specifically the hustle of running a small business, but it's not the dominant throughline motivating everything as in the first, a line of inquiry Soderbergh pursued in Erin Brockovich, Bubble and The Girlfriend Experience, in ways that increasingly played like a meta-text about his own problems getting financing.) Where the original interpolated stripping sequences within Soderbergh's typically tight/obsessive editorial rhythms, XXL is very much meant to provide multiple, long, stand-alone showcases of raunchy choreographic acumen; comparison to the similarly chunky structure of Busby Berkeley musicals is apt.

Both in execution and conception, Magic Mike XXL is an amazingly politically/socially/sexually progressive movie. Some people are monogamous, some aren't; that's OK and understood, decidedly not an Issue. Recipients of dances are of all body types, and the movie doesn't stop to congratulate itself for being body positive. Channing Tatum is casually conversant with drag culture, and why shouldn't he be? The weird taint of male panic that hangs over these films on the side of the (non-)audience — a guy from Kansas City I talked to about the first one who said it was fine for his mom and sister to watch it, but not for him, is representative and definitely not alone — is thoroughly rejected by this film, whose normatively heterosexual horndog protagonists are nonetheless clear about who they are, honest with the women they interact with and entirely comfortable with fluidity in how they present themselves onstage and off. Early on, they joke about how the stripping crew only has one person of color ("Armenian"/"Algerian") and, with Jada Pinkett Smith's help, rectify the demographic imbalance. At her "pleasure club," one of the recipients of a dance responds to Donald Glover's questions about who she is by saying her grandmother was the first black woman in the state to own a grocery store, a reminder that recent history has not gone away or ceased to be relevant when situating your personal identity in a society still majorly fractured by often unacknowledged fault lines. In one line, that casually shared detail negates the racist conservative canard that begins "it's all in the past, get over it."

It's amazing that Magic Mike XXL isn't a Twitter-friendly didactic lecture that underlines how progressive and Right On everyone is; people live their lives in a respectful and inclusive way without asking to be lauded for it, exemplifying values without needing to discuss them. I can't overstate how heartening I find this. I live in a far better world, socially speaking, than the one I grew up in; it's fantastic that I can walk into my regular local bar on a Monday night and unwittingly find myself in the middle of a drag show, in a place for people to do what they want without being harassed. There is a lot of toxicity that is increasingly on unignorable public display, systemic racisms and hatreds running amuck, but some ground has been gained socially; Magic Mike XXL acknowledges that so casually that it reminds me I'm not alone. Channing Tatum has been clear on the idea that the films are meant to be bro hang-out movies, said gay panic specter totally not being on his mind, and there's a satisfying irony that XXL follows on the heels of the conceptually similar Entourage movie (which I haven't seen, but I'm familiar enough with the show) while systematically rejecting all of its normative assumptions about what women want, how men and women interact, what normative power dynamics are, etc.

Structurally, Magic Mike XXL seems to be a very loose riff on Nashville, likewise building to a rally on the 4th of July that inverts the awful stripping scene in Altman's film. It's an oddly patriotic movie — all those flags at the end, and fireworks to boot! — and, in a similarly conscious zeitgeisty-y way, posits what the US is (or could be!) as a country. The dancers themselves are sometimes uncertain about their social value, and age is catching up with Tarzan (the IRL wrestling-batttle-scarred Kevin Nash), and it's entirely apposite (to me) that a key setpiece is set to Backstreet Boys' "I Want It That Way"; Stephen Kijak's recent doc on the group's reformation (commissioned by the Boys themselves) similarly emphasizes the inherent tension of trying to maintain youthful energy and physical poise while the body goes against you. The Backstreet Boys are also an apt topic of diccussion of XXL, which is also admirably specific about the weird entertainment industry culture of Orlando, where aspiring stars hope someone sees them at Disney World and Lou Pearlman could flourish by locking up talented young men for hours in warehouses to practice.

You'd have to be a remarkably inattentive viewer to watch this and conclude that Steven Soderbergh ghost-directed. Many of the shot choices are entirely in line with his recent work, including the use of aggressive zoom lens to mitigate the need to cut for coverage across large spaces, but that's not an unusual director/DP division of labor; the atmosphere, tempo, et al. are decidedly the product of someone else's temperament.

I am trying to think of another recent Hollywood film that's this casually progressive, and all that's coming to mind is Bulworth, a total mess of Old Democrat ideals being vomited out in incoherent order, with racist sidebars about putting down the fried chicken. But Bulworth said we all need to keep fucking and fucking until everybody's the same color, and XXL practices what he preached. This movie really moved me.