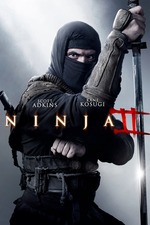 The estimable R. Emmet Sweeney breaks down some of the indeed-impressive fight scenes here. Isaac Florentine has clearly studied vintage '90s HK, plundering Drunken Master- for a bar fight (he also steals the surrounded-by-fire ending) and deploying a brisk widescreen rack focus — from background villain to foreground hero, establishing their starting positions before a brawl — that took me back, as did the routine use of a fisheye lens during fight scenes (it helps you see movement on the Z/depth axis better and reduces visual chaos).

So points for all that, and big ups to Scott Adkins for his fluid fighting style, but dude can't act and Florentine doesn't know how to help him. In Haywire Soderbergh made sure Gina Carano was covered for by a variety of experienced actors who could pick up the dialogue slack so she didn't have to, but that's not a luxury Ninja II has, which would be fine if there wasn't so much talking. It's understandable (deplorable but interesting) that so many '80s actioners leaned heavily on Rambo plots in which white men symbolically finally win Vietnam by blowing away dozens of Thai/Filipino stand-ins; it's far less explicable that a 2013 DTV not only has this but also includes a restaging of the usual Passion of the Hanoi Hilton, complete with sharp zooms into yellow faces laughing evilly at Adkins' pain as he's branded on both legs with a hot iron. Guys, this is racist. It's not gonna meaningfully make the world a worse place or anything, but it just is.

I could argue that Adkins' presence is a riff on the usual martial arts movie trope of having a white fighter inexplicably present somewhere during a fight seqence, generally so he can have his ass kicked by an Asian hero redressing whatever specific wrongs his country's suffered at the white man's hands (a venerable tradition dating back, at least, to an American receiving a whupping from a Japanese boxer in Sanshiro Sugata Part II). The geographic trajectory from Japan to Thailand and Myanmar — "(formerly Burma)," a title card conscientiously announces not once but twice — is intriguing, and I suppose I could argue that Ninja II forms a useful flip-side to Only God Forgives's portrait of Bangkok, presenting an alternate view of foreigners integrating into Thai culture.

But all of that would be a bunch of bullshit.