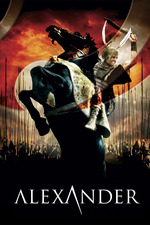 Jesus, this movie makes no sense. It's visually stunning, you got to give director Stone that. It's the story of the greatest battle leader that ever lived, I guess. Im no history student or history buff from that era but I never understood the reason behind the fighting. He's a Macedonian, a Greek, a son of Zeus, I don't know. He grows into a great military leader, born to fight the Persians just because...there's no reason given, they're weak so they should be conquered, he conquers them in order to give them freedom or something like that. Can anyone explain to me why? I don't get it! Long scenes of dialogue that makes no sense to me. Then there's a big ass bloody battle then Alexander is received like a hero by the people of Babylon. I don't know why but they do. Then the gay aspect is handled with such a mix of shyness and hilarious....badness! I can't find another word. Worse is that it comes from Oliver Stone! After more completely lunatic dialogue Alexander feels betrayed, angered, happy, sad, you never know with the guy. Then there's another battle, well staged, bloody, then after many manly hugs between Leto and Farrell, they fade away not with a bang but with a whimper. Stone can cut this motherfucking movie anyway he wants, cut back, put in more material, doesn't matter. The dialogue is nonsense. Just sentences that feel like they make sense and communicate something, only it doesn't. It's a weird thing. By Zeus wet balls! Doesn't make fuckin sense!