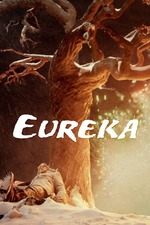 Narrative is not Roeg's strong suit. He is a mad scientist with editing and creating mood and atmosphere.

He does put his skill set front and center at the opening of this movie, but then as things go on and characters start talking more and more, Roeg moves to the background and dull plotting and monologuing take over.

Gene Hackman is great (as always) in the lead, and there are very good turns by Mickey Rourke, in a small role, and Rutger Hauer as a maniac son-in-law. Joe Pesci was in the film as a ruthless businessman after some land owned by. I don't know what the hell he was trying to pull off, but it didn't land with me.

The plot is about a prospector in brutal Yukon like conditions that finds a literal mountain of gold, then we fast forward to him living on a tropical island as the richest man in the world. But all his money hasn't made him happy, as his wife is detached and his daughter is in love with a sociopath.

I usually love being stuck in the middle of Roeg's visual Rubix cube of experience. But in this film I was both bludgeoned by story, and bored out of my mind. It seemed like a very difficult way to tell a very simple morality tale.