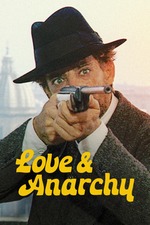 This is my 2nd Lina Wertmüller film after Seven Beauties. I continue to be massively impressed. Her films make me want to marathon her entire collection, but I am pacing myself so that each one gets the time and place in my memory that I think it deserves.

This movie is about an Italian country boy named Tunin, and played by Giancarlo Giannini, that comes to Rome to assassinate Mussolini. Tunin saw an anarchist friend of his die under the oppressive dictatorial regime. This friend was task to shoot Mussolini by his anarchist organization, and now Tunin has decided to take up the charge out of respect to his friend.

Tunin visits a brothel in Rome where he meets his connection, a prostitute named Salomé, who is played by Mariangela Melato. She is a ghostly pale, foul mouthed, anarchist spy / whore. She provides information and shelter for Tunin.

While at the brothel Tunin meets Tripolina, played by Lina Polito. She is a young, adorable, dark curly haired prostitute. The two of them fall madly in love. A love that will complicate if not derail Tunin's mission.

The movies isn't as darkly comic as Seven Beauties, but its interpersonal emotion depth is far greater. There is still a lot of comedic moments, and several absurdists moments as well. It is a darkly comedic, drama, with political and social concerns.

Giancarlo Giannini is an amazing talent. His eyes are intense, as his body is still. He can emote a coolness and a fragility at the same time. He can be manic then switch to sweet within the same scene. Mariangela Melato is also fantastic in her role. She goes toe to toe with the loud and vulgar whores, but she has a trouble past and wants revenge for those fascists that did her and her family wrong. All that being said, the real standout in the film for me was Lina Polito. She plays the manic pixie prostitute, but she too felt like a real person, and not just a movie character. You wanted to take care of her. I'm sure part of that is her childlike appearance, but even more of it came from her performance.

It baffles me after having seen two of Wertmüller's films that she isn't talked about more regularly, or held in the same high regards as Fellini, or John Waters, or even Tarantino. I see a lot of her style and approach to filmmaking in Tarantino's films. Perhaps I have just been sheltered, or perhaps a radical socialist feminist (although she didn't claim to be) filmmaker was somehow systemically ignored or misunderstood.