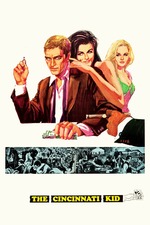 I'm probably the one millionth person to make this comparison, but this film is THE HUSTLER of poker movie.

Steve McQueen play The Cincinnati Kid, an up-and-comer poker player that wants to take on "The Man", played wonderfully by Edward G. Robinson. This film also has an almost unrecognizable Rip Torn as the bad guy, and Karl Malden as the aging pro that never quite made it. Ann Margaret makes an appearance as the flighty / deceitful wife of Malden (who makes more than one pass at McQueen), as well as Tuesday Weld as the country bumpkin / love interest of McQueen.

This is a gamblers delight. A poker movie that actually gets the poker about right. The stakes are high, the mood is tense, and the pressure is on.

Directed by Norman Jewison, this is a taught, suspenseful, thriller that belongs up there with the other classic anti-hero pictures of this time. The film is set in New Orleans, and it really gives the film a sense of location and atmosphere. The music is also inspired by the locale and I found the score very well balanced.

The film can be a bit on the nose (we are talking about the director of IN THE HEAT OF THE NIGHT after all), but as a whole I this movie kept me interested and stimulated throughout.