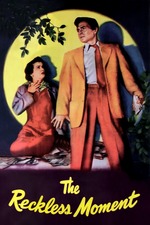 I have to admit, I did not see this movie taking the narrative route it went down.

Joan Bennett plays Lucia, a post-war housewife in suburban LA. Her 17 year old daughter is romantically involved with a much older ne'er-do-well named Darby. Lucia warns Darby to leave her daughter alone, but the daughter sneaks out of the house and meets up with him. They get into a fight, and the daughter strikes Darby on the head with a flashlight. She leaves, and he stumbles off a dock and lands chest first onto a stray anchor, killing him.

In the morning Lucia goes for a walk down her pier, and sees the deceased Mr. Darby dead on the beach, directly in front of their property. In an attempt to protect her daughter, she lugs Darby into a boat, and hauls him off to a swamp to dump the body. That is a pretty ballsy decision for an otherwise picket fence kinda lady.

She thinks it is all over but no. James Mason turns up at her house to blackmail her. It seems the daughter had written love letters to Darby. Mason has them now, and he wants $5,000 to keep the letters out of the hands of the police and newspaper.

It should be said that it has been established that Lucia's husband is away in Berlin on business, and cannot oversee the family affairs. Leaving Lucia to make decisions she is otherwise not prepared to make.

Here is where things really start to get interesting. Lucia is trying to juggle deciding how to come up with the money, and how to handle the blackmail. But even more stressful is the day-to-day complications of a suburban housewife. Her father-in-law lives with them, and he is well intentioned, but nosey and intrusive. The teen son is a rascal and a good kid, but a jokey wisecracker. The daughter is distressed about Darby. The man of the house is away. They have a maid so is also trying to help, but can't stop asking questions. Lucia is more troubled by suburban domesticity than she is by her blackmailer.

Then the film takes yet another unexpected turn. Mason doesn't quite fall in love with Lucia, but he admires her. He is lovely, but she is also tough, and moral, and a good woman and wife and mother. She makes Mason want to be a better person.

Mason has a "business partner" who is the real villain. When the police catch who they think is the killer, the pressure is off Lucia (other than the guilt she feels about letting someone else take the fall for what she thinks her daughter did). Mason tries to square things with his boss, but the patsy is released from jail, and the partner goes after Lucia. And he is not nearly as cordial or agreeable as Mason.

Joan Bennett is very good as Lucia. She is about to act all the complications and confusion and moral ambiguity at the same time. And Mason is an all time cinematic scumbag. One of my favs.

The film is directed by Max Ophüls, who is known for eloquently directed parlor dramas, full of long takes and sweeping camera movement. Well, he kept the long takes and camera movements. But adopted a LA noir vibe for this film. Angles and shadows slash through the screen breaking up in narrative continuity and visually reflecting the fractured condition of the character's psychology.