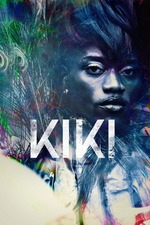 In any other space, the similarities between Sara Jordenö’s revisit to the NYC ball scene (though this time around, the younger splinter, Kiki) and Jennie Livingston's 1991 documentary would be a cause for concern. But here, the homage to the queer lineage is welcome. And, given the much publicised misgivings around Livingston's methods, the gestation of this community-driven follow-up warrants celebration.

With the help of the Kiki community, primarily Twiggy Pucci Garçon, founder of the Opulent Haus of PUCCI Jordenö gains access to the lives of a number of the current scene's key players, each providing an invitation into to their personal lived experience as young-people-of-colour growing up queer and trans*. The stories are compelling, sometimes uplifting sometimes heartbreaking. What is most pertinent is the level of control these kids have taken over their lives with the help of their Kiki families.

Jordenö and Pucci Garçon, who co-wrote the documentary, provide a brief history of the ball scene in New York, stretching back to the 1930s, with structural similarities with Paris is Burning giving another stepping stone to the more politically active scene of today. Kiki balls are stocked with LGBT youth groups and activists and the activities of some of the house mothers and fathers takes their message to the White House and beyond.

If there is a downside to Jordenö’s focus on the community’s activism, it is the impact on the film’s tone. Obviously the balls are political acts in themselves but this gets lost in the mix. Jordenö doesn't quite find a way to thread the vibrant intensity of the walks through the more mundane, often more painful, lives the kids are escaping. The tools are there: the soundtrack by dance collective, Qween Beat, pumps and some more-staged dance numbers, which interspersed throughout, bring snap edits, colour and movement, but the effect is to break the film up rather than bring it together.

Lack of aesthetic binding is a minor concern though. The impact of the film is still immense. The resilience of the ball community and the incredible work these kids are doing to inject fabulousness and fierceness into their lives and into the world at large endlessly impresses. It is heartening to see how much the world has changed and heartbreaking to see how much it hasn’t.

But if there is anything Kiki makes clear, it is that these are the kids who can finish the job.