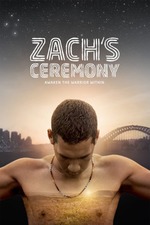 The first thing I got told when I started teaching in the desert was the places I wasn't allowed to go. Law grounds, men's places, waved out of bounds with vague gestures. Just don't walk in that direction. Or that direction. They are places for the initiated. There are secrets and ceremonies there that are only for men's eyes. Don't even point a camera there.

I guess that impressed upon me an enduring sense of boundary. Even now, 20 years later I felt a slightly transgressive watching Zach's Ceremony, the story of Zach Doomadgee and his journey towards manhood, since it includes footage of his actual ceremony. Sure, it is not the whole shebang, but there is enough on display to provide culture-fortifying context to Zach's personal growth and demystifying footage of a rarely filmed rite of passage. On both counts, Aaron Petersen's film bears the weight of immense trust from the family and their community.

It is this trust that marks Zach's Ceremony as a film to look more closely at. These permissions would not have been given lightly, and the level of access given to Petersen, particularly by Zach and his father, Alec, reflect their belief in the importance of sharing this aspect of their culture. Their commitment to the project doesn't go unnoticed; the pair go personal to a degree that they probably weren't expecting when they turned the camera's on when Zach was 10 years old and the film is all the more engaging for it.

Zach's a resilient kid but he's got a lot on his plate. As he says at one stage, the black kids call him white and the white kids call him black - he doesn't know who he is. Add to that, as much as he looks up to his father, Alec is a cultural firebrand who has impossibly high expectations for him, at least in his teenage eyes. The push and pull of their father-son relationship is brutal in its immediacy. What Peteresen has captured over his five years with the family, even without the ceremony, would have been remarkable for its intimacy. It is the scenes out bush, though, that make Zach's Ceremony truly unique. Petersen captures the difference in pace and humour of community life and its revitalising effect on Zach. He also does well to communicate how that cultural reconnection is not the be-all and end-all. Even post-ceremony, Zach's family dramas continue - sometimes, even when it is drawn with absolute finality the line between boyhood and manhood isn't fully recognised.

That'll be a familiar frustration for many in the film's audience (and it is something Alec, too, recognised and reflected on in his post-screening discussion). In fact, many may find there is a surprising universality to Zach's story. His feeling of isolation and his rocky coming-of-age in his father's shadow is something shared by many young men. And while these similarities shouldn't be used to take away from the significance of ceremony in Aboriginal culture, there is a reason the Doomadgee's chose to share this experience with the wider community. There are cross-cultural lessons here that could be respectfully picked up outside of Indigenous culture.

If they could help all boys to grow into young men as aware and culturally conscious as Zach, it would do our country a world of good.