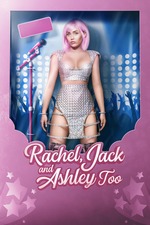 Nah, this just really wasn't my thing. I kind of, sort of see what they were trying to do (I think? The message here is all over the place), but it was just such a jumbled mess I never fully embraced the premise.

Blackmirror has always been about trying to maximize obscurity. But this would be one of those occassions where it's obscurity goes way too far. This whole episode feels so disconnected from itself, neither of the two stories mold well together or work on an emotional level, although I could have forgiven it if it wasn't so slow & mind-numbingly BORING.

Miley Cyrus has her moments, I've just never found her to be much of an actress, even singer if we're being honest. Although I must say, that song she sings has quite a catch to it, which only aided my urge to want to kill myself everytime it came on.

That girl from The Nice Guys was in it though, shame she had to work with this content but she held her own as best as she could.

Guess I don't have much else to say really. All of this just felt like it was desperate to be as edgy as possible for the sake of the show & well, failed miserably in my eyes.