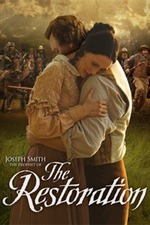 Joseph Smith: The Prophet of the Restoration

This is among my favorite Latter-Day Saint films, as long as it is the uncut theatrical version. Not sure why, but when releasing it on DVD they decided to not include the original cut, replaced most of the acting parts with narrative and music, and it is a much poorer experience. My main issue with the theatrical version was one scene in Liberty Jail that was put together in a very cheesy manner. Otherwise, the film really has you feel for Joseph Smith and the crappy situation that he was experiencing throughout the building of what is now The Church of Jesus Christ of Latter-Day Saints.

I can't imagine having so many of my children die, two of them because of me being tarred and feathered while trying to tend to them being sick. I can't see myself refraining from going on a rampage and taking such people out. I'm not Christ-like enough. The film does a good job of showing Joseph's strengths, though many would critique that it glosses over his weaknesses. The point of the film is not to expound upon those though, so it's no wonder that they aren't present. I love this movie, it has made me cry a number of times (will probably continue to do so throughout the years), and I feel blessed that I found the uncut version floating around on youtube.