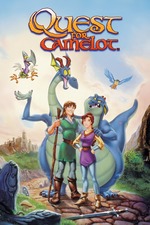 I think the animators here couldn't seem to decide how to draw a face at any given time. A number of the sequences feel contrived just to push along the story rather than even being close to feasible, and it hurts the serious sides of the film. That being said, the movie is immensely entertaining, has some of the best music to ever grace an animated film, and perfectly balances it's use of CGI and hand-drawn animation. The pop culture references were fun to pick out, Rickles and Idle were consistently amusing, and the love story between Garrett and Kayley was cute. Also, I have loved the style of the griffin, the swords, and the symbols and such since I was a little kid. Very fun to watch, especially if you don't take it too seriously.