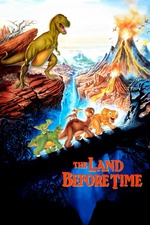 The Land Before Time

I didn't realize that so many of the things that we would be seeing in The Lion King (especially a parent dying in front of their child and then later in the clouds guiding their child to prosperity) would be first seen here and I loved the faith-based aspects of the film. Things do not exist because we have experienced them, which means there are many things which we have not experienced which are real. So many parts of life are only able to be first believed in before they can be quantified and understood, and this is where faith becomes so important.

The Land Before Time tries to tackle a lot of issues within it's 1 hour runtime. The problems of exclusionism between race, culture, nationality, class, and cliques lead to heartache and weakness in progress. We all do best if we take the best aspects of our ideas and work together for a better tomorrow for our children by continually improving upon them. No civilization is perfect and all could do with some fixing, though this does not mean that because a system has problems it should be dropped immediately for another.

The death of Littlefoot's mother is a memory of tears from my childhood, the music is beautiful, the film itself brings my emotions to bear, it's one of (if not THE first) amazing dinosaur film, and I can't imagine a better film to watch with my future kids. The film is great at using simplified language for children while not feeling pandering or irritating to adults, and quotes from this movie have circled around both my and my in-laws family for decades even though none of us have seen it in years. Iconic, violent, and packed with important life lessons, it will always be an animated classic to me.