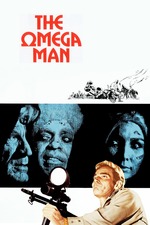 I thought this film was a lot of fun. The film derails itself a bit from its I am Legend roots, but still makes for an entertaining dousing of symbolism. The Family has decided that technology and all that came along with science led to the curse of pestilence upon mankind, and they will stop at nothing to destroy the remnants of science's presence. Obviously one can not completely devolve from technology (this is the inherent difficulty with critiques of post-modernism, it's almost impossible to erase the imprint of technology once it has been discovered) and this cult is seen to be quite hypocritical in its aims.

They use wheels, but use the wheel as a symbol for the advance of humanity that made them the blight of the world. Fire consumed the earth, and yet they use fire on their enemies. Pestilence is the curse upon mankind, and yet they want to keep that curse bound to them like a rite for humanhood. Technology itself is a forbidden sin of poison, but to get rid of one of his enemies, Zachary is willing to tempt the devil and use a firearm. There are plenty of groups throughout history that have embodied these hypocritical attributes.

The Omega Man himself is surrounded by imagery of being a Savior while also dropping fire and brimstone upon the heads of the enemies of healthy humankind, and even dies in a kind of crucifixion imagery. His actions were to bring the little children and any followers he could find out of darkness into a beautiful new world. That being said he is a severely faulted man with little to no faith in anything, gets it on with Lisa of course, and has a penchant for violence that makes Richie fear him more than Matthias, so the symbolism is obviously very hit or miss.

I thought it was a fun action flick, with amusing stunts, great sets, and an interesting (if predictable) script. I can watch almost anything with Heston. The guy is just incredibly entertaining to watch.