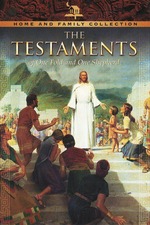 The Testments is hard to review and I doubt I'll do a perfect job of doing so, but I will do my best. Most of the acting is pretty amateur, the parts of the film that are specific to the Book of Mormon are too confusing for anyone other than a church member to understand, and the usage of film from previous doctrinal videos I think was a detriment to the power of those scenes and this combination of all of them. The Nephite architecture and props are both good and bad, with parts being obviously fake, and then there are other parts where the artwork they had to create for the scenes are really good, so it's a mixed bag. I liked that Jacob went to old ruins for inspiration, since back in ancient days it makes sense that even then an artisan would have tried to study the work of masters long since past and that was a good addition to the film. The actor that plays Kohor easily has the greatest screen presence and he is both terrifying and ridiculous in a great way, would love to see him in other films. The scenes for Christ's death are still powerful these 20 years after I first saw the film, and make it, even with all it's problems, still a movie I like watching.