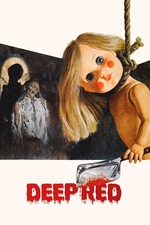 This week we’re watching Dario Argento’s 1975 giallo thriller - DEEP RED. This is a pretty fitting transition since last week we had Romero’s NIGHT OF THE LIVING DEAD. As you might know, Argento collaborated with Romero’s DAWN OF THE DEAD. We love it when masters of horror create together.

Deep Red could simply be labeled as a “whodunit” film, but it truly does embody the spirit of an arthouse horror.. For those of you who don’t know, Giallo can be characterized as an italian crime thriller or muder mystery. His work provides fashion, aesthetics and choreographed deaths that distract from the clues that are sometimes right in front of the protagonist… and the viewer. Argento likes to stress the importance of gaze and challenges his audiences to take everything in within a scene. This includes his detail to elaborate costumes, makeup and production design which each hold clues within his works.

This leads into talking about the character of the black glove. This is pretty much the only part of the killer that we see throughout the film. Initially it might be determined as an aesthetic reason, but it’s actually because those scenes were performed by Argento himself. He believed that it would take too long to teach the movements of the murders and then to be executed to his satisfaction. This is just one illumination of the iconic director’s process. This also includes his dedicated collaboration with composer- Goblin. Please pay close attention to his creepily fitting score.

DEEP RED is more than just looks. The film touches on topics such as the effects of childhood trauma - shown through the imagery of drawings, toys and most importantly - the creepy dolls! This is an example of early use of doll iconography in horror. DEEP RED also successfully subverts gender roles in 70s genre films by making Marc kind of a tragic “damsel in distress”,, while Helga is generally a witty badass.

.John Carpenter notes that Argento’s earlier films highly influenced him. This is emphasized in a little slasher you might be familiar with, Halloween. Take note of the parallels in the openings scenes while watching DEEP RED. Other works that might interest you if you enjoy the film is Knife + Heart, RAW, Scream, Dead Silence, Annabelle, and well… any other Dario Argento film.