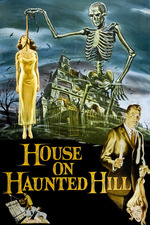 Welcome to ALTER: Horror Through History. This is the third in a weekly series of classic horror movie viewing parties. With each installment we will be introducing a famous film from the horror canon and discussing how it's still influential today.

Right now I am pleased to introduce the cinematic treat that is William Castle’s 1959 House on Haunted Hill. In this film, horror icon Vincent Price plays a millionaire throwing a “party” in a haunted house (go figure) for his wife. However, instead of inviting all of their friends, he picks a group of people to pay $10,000 each if they can stand being locked inside the home for one night. You know, just casual party games.

Castle knew his genre: B- horror. He was a master at taking small budgets and creating larger than life worlds. He was inspired to create such niche films after watching the 1955 psychological thriller- Les Diaboliques (dee-ah-bolique). Something that made him stand out is his use of the gimmick. He’s self aware and leans into the carnival-esque special effects that go into his films. He embraces the camp and somehow still creates an atmosphere that leaves the audience on edge.

Castle made a point to have his work as immersive as possible. House on Haunted Hill specifically had a trick he called Emergo, which consisted of an elaborate pulley system behind the theater screen holding a large plastic skeleton with glowing red eyes that would fly over the audience at the climax of the film. This had the audience going wild. Eventually movie-goers caught on and would throw things at the skeleton, some troublemakers even brought slingshots.

What I love most about House on Haunted Hill is that it’s not a monster film. The antagonist is supposed to be the house, but truly it’s just a rich guy in a suit. It unapologetically blends horror, drama, and mystery- a cocktail that makes for a wild ride. This film not only paved the way for other iconic Haunted House movies, but also for psychological horror. Alfred Hitchcock even studied this film among other Castle’s work before creating Psycho (1960).

I’d also like to emphasize that this work was made in the 50s. Although I’d like to believe the concepts thrown around are tongue in cheek, I’m still not quite sure. Castle certainly uses the mental state of each character as a driving force for creating horror through reaction.I find this interesting, although problematic in a lot of ways.

Even though Emergo probably won’t appear in your living room, and things might not get as rowdy (that’s a challenge), there are a couple of things you can do to enhance this viewing experience. As I said before, Castle did a great job of poking fun at his haunted house gags while additionally creating tension. He did this in two ways: amplification of sound and the use of harsh lighting. I invite you to watch House on Haunted Hill with the sound up and the lights off. Enjoy!