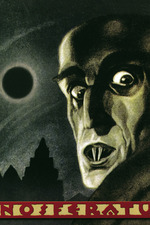 Welcome to ALTER: Horror Through History. This is the first in a weekly series of classic horror movie viewing parties. With each installment we will be introducing a famous film from the horror canon and discussing how it's still influential today!

We’re starting with the OG cinematic vampire, Nosferatu, who stars in the 1922 work of the same name directed by German filmmaker F.W. Murnau. Although recognised today as a masterpiece of silent cinema, there was no shortage of controversy surrounding Nosferatu when it was first released. The film is a completely unauthorized adaptation of Bram Stoker’s Dracula, the 1897 novel that first brought vampires into the public eye. Although widely acclaimed upon its release in Germany, Stoker's estate soon caught wind of the adaptation and sued the studio responsible, Prana Films, for copyright infringement. The court case bankrupted the studio and the judge ordered all copies of the film to be destroyed. Thankfully for us, at least one print survived, being copied and distributed around the world in the years that followed.

Needless to say, filmmaking technology and techniques have changed a lot since 1922. Modern audiences may not necessarily see Nosferatu as "scary", but its 94 minutes are undeniably haunting, thanks in large part to the expressionist style of filmmaking utilized by Murnau. Birthed out of the fears and anxieties of World War I, German Expressionism was an early 20-century art movement that emphasised the portrayal of the artist's ideas and emotions over a simple replication of reality.

Nosferatu was created during a particularly turbulent time in German history. The fallout from the end of WW1 was really beginning to weigh on the German psyche at this point, with reparations of 33 billion dollars crippling the country financially and humiliating its people. Murnau didn't have access to studio sets or artificial backdrops. Instead, he took the production to Slovakia, where Count Orlok would stalk through the ruins of decaying castles. With his hideous makeup and creeping claws, Murnau's vampire has long been said to represent the Other.

We hope you love the film! If Nosferatu is up your street, we recommend checking out Werner Herzog’s remake, Nosferatu the Vampyre (1979), as well as Shadow of the Vampire (2000), a fictionalized documentary account of the film's production starring Willem Dafoe. Those of you who want to see more of Murnau’s work should start with the incredible Sunrise: A Song of Two Humans.