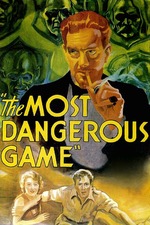 The Most Dangerous Game 1932

Welcome to ALTER: Horror Through History. This is the second film in a weekly series of classic horror movie viewing parties. With each instalment we will be introducing a famous film from the horror canon and discussing how it's still influential today!

This week we’ll be showing THE MOST DANGEROUS GAME, a 1932 horror thriller from producers Ernest B. Schoedsack and Merian C. Cooper — the duo behind the original King Kong.

Now, before we get into the countless reasons why MOST DANGEROUS GAME remains arguably the most influential horror film, if you look closely you’ll notice that all of the sets used in THE MOST DANGEROUS GAME are quite literally the same as KING KONG’s. That’s because the directors shot all of the scenes for the film at night, on the King Kong set, and using three of KING KONG’s principal actors: Robert Armstrong, Noble Johnson, and the starlet of both films, Fay Wray.

Enough of the side stuff, and now onto why MOST DANGEROUS GAME is not only one of our favorite classic horror films, but being remade left and right today. Based on a short story of the same name by Richard Connell, THE MOST DANGEROUS GAME’s set-up is simple. A wealthy big game hunter invites people onto his island. From there, he begins to hunt all of the people on his island for “sport” — and yes, he has every intention of killing them.

This film looks at how evil humans can be, especially when one becomes out of touch with their own humanity, and reality, due to extreme excess wealth. There’s something deeply frightening about this idea, to believe that when people find themselves bored with modern existence, instead of buying another yacht or taking a trip around the world, their goal would be to hunt and kill others who they feel are lower on the societal totem pole than them is a seriously messed up idea to present in a film. You might not expect this from classic films, which are typically thought to be prudish and unfortunately, boring. Thankfully, this film slid in 2 years before the enforcement of the Hays Code that changed the face of cinema for decades.

The fight between the classes remains a persistent theme in cinema, and as such THE MOST DANGEROUS GAME continues to be updated. In the past year alone, we’ve seen Radio Silence’s sly homage with READY OR NOT, Blumhouse’s reimagining with THE HUNT and Quibi’s more literal remake THE MOST DANGEROUS GAME starring Liam Hemsworth and Christoph Waltz. The class division we’re all feeling and seeing on a daily basis makes the stakes of MOST DANGEROUS GAME easily updatable, and not just within the horror genre. The premise of people hunting each other for sport and money has even found itself within stories like 2000’s Battle Royale and the hugely popular YA series Hunger Game. In these stories, it might not be people hunting each other on their own terms, but they’re nonetheless forced by the elite to kill themselves or else.

Terrifyingly, THE MOST DANGEROUS GAME’s impact unfortunately isn’t only reserved for the cinematic or literary art forms. Instead, real-life serial killers have been inspired by the story - including the Zodiac killer, who wrote letters to the San Francisco Chronicle with the film’s quote: “Man is the most dangerous animal of all to kill.”

That fear of what humans can do to each other haunts us much longer than our monsters under the bed, vampires in the casket, or zombies outside our window will. Not to say those don’t still terrify us, but THE MOST DANGEROUS GAME certainly proves that humans are certainly the most dangerous and scariest animal of all.