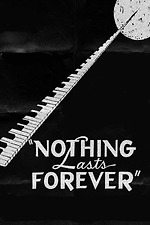 I feel like I’m not smart enough to accurate describe everything that is going on in Nothing Lasts Forever. As if words don’t do it justice. I feel like I should be giving it some kind of abstract display like a self high five or an interpretive dance to help express all the emotion behind what it’s actually trying to accomplish.

To say this movie has layers to it is like saying Sally Field’s Sybil was one dimensional. The face value weirdo storyline here is just the tip of the iceberg. This is (all at the same time by the way) a love letter to old timey cinema, a satire of consumer culture, a romantic fantasy, a kick in the dick for art douches everywhere and a strange futuristic view on overpopulation all at the same time. If I were grading this film just on ambition, concept and heart then it would get a five star rating, easy.

But I’m not. And it’s not that great of an overall film. Clocking in at about 80 minutes, this thing is a jumbled mess of seemingly good ideas all mashed together using a singular character, despite the fact that the adventures he goes on don’t exactly add up. In the film’s first scene, protagonist Adam (Zach Galligan) is a con man who is tired of pretending to have talent and sets out on a journey to become an artist. So immediately you respect him because he walked away from being a phony and you think you’re going to see him work towards his goal for the rest of the film…but you don’t. Instead you get him failing a 30 second art test THAT’S NOT EVEN IN THE FIELD OF MUSIC. IT’S A FUCKING SKETCH TEST and he’s immediately sent to work for the city in a bullshit capacity, literally staring at traffic.

From here you now think that the film will become a satire of the art world, and it kind of does for a little while. As Adam navigates the 80’s nouveau art scene he’s as flabbergasted as anyone looking in on the preposterous, non-art art of people walking on treadmills and bands who don’t know how to play their instruments and you think that he’s going to find success in some silly way that he didn’t realize was art…but he doesn’t.

Instead we get a callback to an earlier scene where a bum Adam showed kindness to returns and offers to show him the underground level of New York City, where bums have lavish ticker tape parades and find slips of paper with names written on them, then set out to become guardian angels of those worthy enough. Due to his kind nature, Adam has been selected to help promote the group’s message to the moon, of course. And as a bonus he’s told he’ll also meet the girl of his dreams: a lunar hula gal who’s likeness is in a painting he inherited on the wall of his hotel room apartment. At this point you just want to walk up to the movie and slap the ever loving shit out of it, because come the fuck on already…but you don’t. You calm down…remember it’s sweetly innocent and good natured, and you swallow this horse pill of a fucking screwball turn. Because now you’re thinking it’s a dream! Of course it’s a dream! He was sleeping earlier at his desk in the tunnel! It explains everything!

But it’s not. Because next Adam GOES TO THE FUCKING MOON. And on a bus. A fucking bus. A bus designed for senior citizens to go shopping on. And the bus ride to the moon is quite long, as you would probably imagine a bus ride to the moon would be. And when it’s revealed that the entire reason people would even go to THE FUCKING MOON is just to go into a gigantic mall that’s been built on it, well then you immediately think that this will be the satire of our consumer culture portion of the film. That it will show you vast, beautiful landscapes on an unexplored land mass and will only have people oooing and ahhing at discount prices on sweaters and stuff they could easily get at home…but it doesn’t. That aspect is only mentioned, never explored. We don’t meet anyone who actually works on the moon, only Bill Murray as our transit guide and who also operates a gigantic control room with an instantaneous sales ticker and an infrared tracker to see where Adam and the aforementioned girl of his dreams goes.

And when Adam meets that dream girl their love is, no exaggeration, immediate. She recognizes him…he recognizes her. Boom, they’re in love. No context or reason…just love. So now you think that the film will become a rescue mission of forbidden love where Adam and his girl are on the run from evil Bill Murray throughout the cosmos! But it doesn’t. Instead Adam is literally HURLED OFF OF THE FUCKING MOON and crashes back down to Earth, figuratively and literally. And that’s where he’s met with great excitement by his bum guardian angel, who tells him he’s succeed and oh, by the way here’s the gift of being a concert pianist for ya. He plays Carnegie Hall. Boom. Roll credits. Wait, what?

It’s worth noting that first time writer/director Tom Schiller had complete creative control over this thing after being gifted a deal from burnt out old friend Lorne Michaels during his SNL exile in 1984. Despite that fact this feels like it’s missing 8 or 10 twenty minute chunks throughout the film and that nobody was consulted on which chunks would be removed. The beginnings of all these great ideas are here but it’s as if Schiller had no idea how to wrap up any of them and thus just decided to hog pile them all together to help achieve a feature film runtime. But instead of using a SNL sketch approach where a new everyman character was introduced every act and had him go on his own adventure, we’re given the SAME GUY just living several lives seemingly one after another after another. Does it make me stupid that I can’t connect the dots and realize the germ running throughout the thread here? Or does the fact that I once failed a kindergarten exam on how many toes I have repeatedly and adamantly standing by the fact that I have 12 (when I don’t) make me stupid? Probably the second one.

Because this film is a lot of things alright. It’s weird and badly paced and biting off way more than it can handle. But it’s not stupid. It’s maybe too ambitious though. Maybe short filmmaking and sketch mentality prevailed here for Schiller and he just wanted to cram every good idea he had into one big pot. But despite it’s flaws it’s still very watchable. It’s light, fun, sometimes very funny and very dreamlike. It’s a goddamn shame that it has been dismissed and ignored for as long as it has by both MGM and Warner Bros (who both claim to own the rights to this despite both not caring enough to figure out who does and get it released). So while I agree that it’s a tough sell to most people, and that it occasionally makes you frustrated with it’s inability to drive it’s points home, I’ll counter with the fact that it’s imaginative and different enough to stand out as memorable for me. And I’m the same guy who still calls The Instagram “The Photobucket” so for me to remember something, it’s gotta be special.