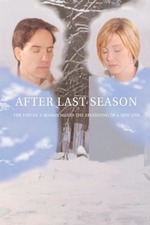 “I was… having a terrible dream.”

Producer/writer/director/cinematographer Mark Region’s After Last Season is often mentioned alongside such jarringly guileless films as Tommy Wiseau’s The Room, James Nguyen’s Birdemic and the films of Neil Breen. Despite the fact that After Last Season demonstrates all of the hallmarks of low-budget naive digital cinema which these films share in common—counter-intuitive framing and shot compositions, unmixed sound, crude effects, library piano soundtrack—it was actually shot on 35mm film, photographed and edited piecemeal over ten years, supposedly for a budget of five million. And while its baffling narrative and singular aesthetic mirror aspects of popular “so-bad-it’s-good” cinema, After Last Season lacks the extreme mawkish and hysterical moments that play to condescending audiences, creating a tone that is confounding but never receptive to smug, knowing laughter.

Despite its small cast and limited, recycling interior locations, After Last Season’s narrative is bafflingly convoluted and twisty, including and matching EVP, schizophrenia, serial murder, precognition, telepathy and cybernetic implants, united as research subjects for the enigmatic yet featureless Prorolis Corporation. The basic components of narrative cinema are equally jumbled, as basic character relationships are difficult to parse, and the passage of time between sequences is never reliably conveyed. Dialog is elliptical yet plain, conversations between emotionally voided characters play as sinister, and neutral line deliveries deny any hierarchy of narrative relevance, joining in importance meandering anecdotes, the eulogizing of murdered friends and family members, and celebrations of revolutionary scientific discoveries as they happen.

As remarkable as After Last Season’s bizarre tone is, its production design is even more outlandish and puzzling. The cardboard MRI machine that appears in the first scene is hardly an isolated budgetary compromise; in fact it is a sort of declaration of craft, the first in an endless string of disorienting choices for the art department. Commonplace items seem to confound the prop department, requiring clumsy and blatant fabrication, for example a clock radio is represented by a small alarm clock glued to a stand-alone radio, not even matching in color. Scenes play in hastily-dressed corners of basements and alleyways, empty except for piles of trash only partially obscured by folded, upright corrugated cardboard, a ubiquitous feature of the set decoration.

Office buildings, hospitals and college dorms alike are dressed with jagged sheets of wrapping paper, taped over crooked plywood. Blank pieces of 8½ x 11 paper are pasted everywhere, even in exterior shots. Are these windows? Were the papers taped everywhere intended as markers for abandoned CGI compositing? The film has an almost totemic interest in trash and found objects—gutted CPU towers lie in even rows next to chipped, unfinished office furniture, a bundle of rope is haphazardly tacked on to an otherwise empty cork-board. The film is full of pointless cutaway shots of the corners of rooms, of ceiling fans, potted plants, and, most bizarrely, a paper scrap with “Pineapple Club” typed on it, hanging by its lonesome on a college dorm bulletin board. The clash between otherwise clean, Dogville-esque open spaces and bare white walls and seeming arbitrary piling of garbage and the affixing of scrap paper has to be a deliberate design choice, however the rationale is totally obscure.

The film’s varying narrative attentions converge towards its conclusion for a virtual sequence, meant to represent the computer chip-assisted exchange of live and precognitive lucid dreams between scientist Matthew (Jason Kulas) and his student/assistant Sarah (Peggy McClellan). Resembling a Windows 95 screen saver, the raw computer animation on display is genuinely nightmarish and distressing, a collage of “Money for Nothing” figuration, digital voice, phasing sound effects and narcotic narration (“There’s a haze over his face”). Matthew’s remote viewing/strangely unreliable precognition is followed by a slow-motion fight between a deranged killer (a plot-thread that is afforded very little attention or gravity before this scene) and an invisible, shapeless ghost form named “Craig”, as Matthew and Sarah stand hypnotized, dispassionately commenting on the fight as it happens.

As compelling as this scene is, it fails to deviate from the film’s sedative tone. So consistent is After Last Season’s depersonalizing, alien tone that the film is like a recording of white noise, a relaxation tape to help insomniacs drift off to sleep. Region’s visionary debut casts a unique spell, and despite its obvious technical limitations and amateur performances is one of the most original, singular films of the new millennium, a film which resists interpretation and categorization and demonstrates neither influence nor obvious precedent. What After Last Season is, defiantly, is an anomaly and an astonishing mutation, a nightmare, a depleted shadow version of both cinema and reality.