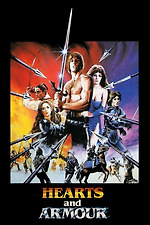 Lightly psychedelic, oddly affecting Italo fantasy from Giacomo Battiato. Swaps out the Tolkien and Howard tropes from other Italian sword and sorcery films for something vaguely historical/literary, loosely basing its story on Ludovico Ariosto's Orlando Furioso, an epic poem retelling the Moorish invasion of the Roman Empire under Charlemagne (the Moors are mostly played by white Italians). There are too many characters, and the story seems needlessly complex despite taking place in a limited number of locations, but everything sorts itself out in the end.

Despite its historical grounding, there are still immortal magicians, oracles and other mystical story elements. The conflict between the Moors and Christians at the center of the film is almost elemental, but established only to be dismantled, with no clear distinction between "good" and "evil" characters by the end, with refusal by the Roman knights and mages to kill Ruggiero (soap actor Ronn Moss) playing as some sort of essential conflict against the concept of fate itself, an attempt to break the cycle and disrupt the flow of history. While the forbidden romance between the Moor Ruggiero and the female Christian Knight Bradamante is at the center of Ariosto's novel, its importance overall is faded a bit here.

The most impressive thing about Hearts and Armour, arguably, is the costuming. Knights are elaborately armored, each sporting a unique helm topped with decorative skulls, sword hilts, birds, sunbursts, etc. The best set of armor is worn by the Moor Ferrau (played by Tony Vogel, the lead in Roger Christian's Black Angel), a very Soulsian avian-themed ensemble of bird's head helm and pleated ring mail.

There's a mysterious and spiritual quality to Hearts and Armour, and an emphasis on space and environmental detail usually absent from this sort of genre film, which speaks to Battiato's ambition. The drawn-out killing mid-way through the film of one of the knights is incredibly disturbing, a reminder that the more traditional sword battles to come are perhaps not so glorious, and that war is usually a waste, and an ugly horror always. The plains, forests and mountains of southern Italy standing in for the South of France become a more liminal and vague setting, a mash of myth, history and the conventions of the fantasy genre.

While Giacomo Battiato's filmography is mostly unknown to me, this film has an incredible ensemble cast and crew. In addition to Moss and the great Vogel, the cast features Tanya Roberts, Al Cliver, Hal Yamanouchi, comedian Maurizio Nichetti, Bobby Rhodes, Leigh McCloskey from Inferno and Barbara De Rossi as Bradamante, the film's best character and performance. The film's editor is the great Ruggero Mastroianni, the regular editor for Fellini, Petri and Visconti. It's shot by Dante Spinotti, who went on to a career in Hollywood, becoming Michael Mann's cinematographer.

There is no decent-looking print of this available as far as I can tell, versions on YouTube and torrent sites either being sourced from VHS tapes or TV. The best version appears to be a widescreen TV rip, but it's pretty soft, and features the Italian dub with no English subtitles. I don't know that Hearts and Armour has ever been released on DVD, and sure isn't available on Blu-Ray, which is a shame.