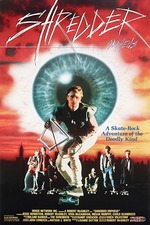 Action International Pictures remains the most unfairly unheralded DTV distributor of some of the best and weirdest action movies of the 80s and 90s. Director, writer and star Robert McGinley's Shredder Orpheus may be A.I.P.'s most ambitious release. McGinley is Orpheus, of Greek myth, here recast as post-apocalyptic skate-punk messiah. While the film essentially retells the story of Orpheus and Eurydice, McGinley dresses it up with ideas and images borrowed from Street Trash, Repo Man, Videodrome and Brian Trenchard-Smith's Dead-End Drive In. The Road Warrior is a clear influence as well, as the character of Axel is seen to be totally shell-shocked and feral, yet soberly narrates the film. This is of course the same device George Miller applies to the character of The Feral Kid.

Orpheus, his wife Eurydice, Axel and legions of other hopeless punks and skaters inhabit "The Grey Zone", a shanty town of shipping crates and scrap metal. Orpheus sings for The Shredders, the Zone's favorite band, playing a sort of goth take on surf punk. While there is a narrative through-line here, McGinley is just as concerned with detailing his universe, taking breaks for junkyard percussion jams and half-pipe exhibitions.

The film's narrative engine starts when Eurydice is kidnapped by talent scouts for "The Ray", a mind-control television show broadcast from the "Euthanasia Broadcasting Network". Orpheus rides a mythical skateboard through Hell's parking garage to save her, but not before jamming a set of digital noise on a proto-tablet, an explosive protest remaking him a Zone hero. Orpheus fails to rescue the amnesic Eurydice, and thus retreats to the Zone to regroup before the final, genuinely shocking conclusion.

Thematically, narratively and aesthetically successful, Shredder Orpheus is the singular work of a unique cinematic mind. Robert McGinley's career has essentially been cold for years, and this is a shame. A film and a filmmaker deserving of discovery.