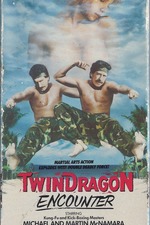 Trainwreck action vanity project from Torontonian twin brothers Michael and Martin McNamara, martial artists and proprietors of the Twin Dragon Kung-Fu & Kickboxing Schools franchise, eight dojos which may still be in business. Mick and Martin literally play themselves here, taking their girlfriends on a camping trip in the country in what is essentially a slasher film set-up, swapping out a masked killer for a gang of cartoon punks who cruise around in kayaks with "The Peoples Private Army" painted on the sides.

This is a bizarre movie, with most action scenes playing out in slow-motion, set alternately to dead silence or avant-garde synth-tone score, composed by someone named Billy Butt. Why would they choose to edit the film like this? To stretch out the run-time to its still paltry 73 minutes length? Or to display their hard strikes and high-kicks, their impacts appearing all too real most of the time? Or is it abstraction for its own sake?

The brothers made two sequels, including the unreleased The Real Twin Dragons, which appears to be based, Decker style, on the brothers' real legal problems and grievances with local civil servants. You can read all about it here, on their broken, eyesore website, with bolded or all-caps exclamations like "Ontario Canada is the worst place in the World to promote a professional ring combative sporting event!" and "WE ARE NOT AN ILLEGAL MARTIAL ART FAMILY."