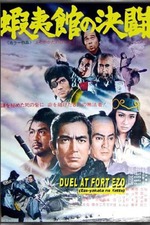 “Forgive me. This was the only way to make you feel and act like a woman.”

Wow. This was going to be my next Shogun’s Samurai - another terrific and underrated samurai film - but then an hour and twenty minutes into the film, the hero rapes an Ainu woman to demasculate her so that she’ll help him. To top it all off she then falls in love with him whilst also losing all character traits that made her interesting in the first place.

This feels like the most egregious example of this kind of storytelling I’ve seen in a long time but maybe that’s partly because everything outside of it is so good. Rentarou Mikuni’s duplicitous character and performance is great, possibly my favourite role from him so far, and the action and story outside of this is really compelling (it even has a good Nakadai cameo ffs).

And the thing is I can think of so many better ways that the story could have got to the same destination without that plot point.

I had a whole other review coming together in my head whilst watching this before things went south (would probably have given it a 9/10) but I’ll never write it now because this is just another rape film.

The Line, the Cross & the Curve