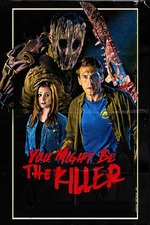 Another '80s inspired slasher comedy tribute from newcomer Brett Simmons stars Fran Kranz as Sam Wescott, the likeable, down to earth lead counsellor and owner of summer camp Clear Vista who is trying to survive a bloodthirsty murder spree being committed by a crazed, masked killer.
It's orientation week so the kids haven't arrived yet but there is plenty of mindless counsellors around to massacre and Sam is powerless to stop the slaughter.
He phones his best friend, Chuck (Alyson Hannigan) - who is doing her Saturday evening shift in a popular local comic book/movie rental store - for help and with her calm demeanour and limitless horror movie knowledge she tries to talk him through events in an attempt to help improve his chances of survival.
We begin to go through a series of intentionally disorganised flashbacks as we discover what led us to the gruesome present and to uncover the mystery of who might be the killer?
It's all done with its tongue firmly in its cheek for the best part and with such experienced and dependable horror veterans as Kranz (The Cabin in the Woods) and Hannigan (Buffy the Vampire Slayer) leading the way you know you are in pretty capable hands. The rest of the cast are pretty much all complete unknowns and newcomers but fair well and it's executed with enough reverence to the particular genre to satisfy most nostalgiaholics as well as featuring a few pretty strong laughs, especially the ending with Kranz's very final line over the phone a particular highlight that capped it off well.
As I've noted before in previous reviews the market is pretty saturated with this kind of stuff right now that being '80s tributes whether they be horror, horror comedy, romcoms, coming of age etc but if it's done well enough then I suppose no harm/ no foul.
Whilst it's not on the same level of the almost identical 'The Final Girls' (2015) it's still a pretty enjoyable little watch especially if you're winding down after a heavy weekend with a beer and a pizza.