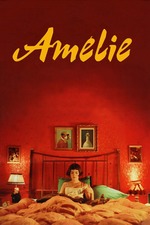 Okay, okay, so it takes place in a kaleidiscopic, pastel-coloured carnival of whimsy and overwhelmingly-white Montmartre that does not exist, and never did; even in its arty Chat Noir, Can-Canning heydey. It's been rightly criticised for not reflecting the multi-cultural nature of modern Paris, and the plot is admittedly slight.....

But it's also the most joyous, idiosyncratic and downright fun movie I think I have ever seen. Most of my other favourite films tend towards the bleak, but the first time I saw this I was instantly captivated. No, make that spellbound.
First off are the characters. Jeunet has created memorable characters with a few broad Dickensian strokes. It's a tremendous feat. Even the minor characters stay long in the memory: The Glass Man, M. Collingon the repulsive grocer, Madeline who lives downstairs waiting on her lover's letter that never arrived, Georgette the hypochondriac waitress. Each a perfectly written little nugget in a goldmine.

But it's Amelie herself that holds the attention. Doe-eyed and gamine, she’s half impish mischief and half naïf romantic. She’s obviously a few rungs up the autistic spectrum and struggles to make her own connections of the heart so she makes it her mission to help others. I fell in love totally and utterly with Audrey Tautou here. It would have been easy for the character, and by extension the entire movie overly cutesy and cloyingly sweet. But there is resilience and a determination there to manhandle the world into how she thinks it should be (not always by entirely legal means) and Tautou conveys this subtly; the occasional clomping stride, the odd childish pout. She’s adorable yes, but as Collignon finds out, you wouldn’t want to get on the wrong side of her. Housebreaking and slightly stalker-ish behaviour are acceptable weapons in Amelie’s arsenal.

Also superb are Jeunet’s little touches of surreal wonder and quirky humour. Vignettish little digressions and off-tangent hints of back story litter the film like confetti. Amelie’s pondering of how many couples are enjoying an orgasm right now leads to one of the funniest montages in movie history; a comatose woman wakes long enough to explain her plan of getting her entire life’s quota of sleep out of the way in one sitting (as it were); a break-down of the bizarre likes and dislikes of various characters. They are obvious padding to the plot but done so well and they are so charming and funny that they never feel like mere embellishment.

Of course, icing alone doesn’t work without the cake, and the emotional core is provided by the protracted, sweet, sometimes ingenious, and often frustrating courtship between Amelie and her soulmate Nino Quincompois (Matthieu Kassovitz). Nino is a fellow dreamer who has a baffled innocence about him that makes his job in a sex shop all the funnier. He is unaware of Amelie’s existence for a large portion of the film which leads to her going to greater and stranger lengths to get his attention. It all culminates (not to give too much away) in one of the most pleasing, romantic, and gently erotic scenes ever.

Add some beautiful camerawork and a gorgeous score by Yann Tiersen and this is my perfect movie.

On a more personal note, this film managed to bury itself even deeper into my heart when a pretty girl I’d noticed once at an open-mike event sat down next to me. Doc Martens, cardigan, dark bobbed hair. Guess why I was smitten? I’m still with her now.