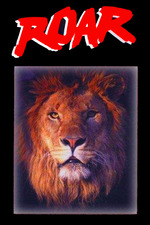 The ultimate in catsploitation, though the elephants hold their own. I won't waste your time with the background behind the making of this film as that is a story of its own (and a DVD extra worth watching).

What we do have is The Exorcist producer Noel Marshall's one turn behind the camera, and if this is any indication, with good reason, as this looks beyond dangerous for all involved, behind the scenes or in them. Marshall was passionate about the plight of the great cats, and took many into his own home to prove that they could not only coexist with each other, but with his family (including then wife Tippi Hedren and stepdaughter Melanie Griffith). I was prepared for this to be a bit gonzo, but it's like a really reckless episode of Wild Kingdom. Famously, no animals were harmed in the making, but the humans suffered injuries ranging from broken bones to facial reconstruction for Griffith to gangrenous puncture wounds from director/star Marshall himself, and probably lots of other physical trauma in between.

Make no mistakes, there isn't much in the way of plot here, and I don't think anyone is "acting" terrified. But, as a sheer spectacle of crazy animal action, it delivers the goods. After watching it, I had the same sensation I have after riding a great roller coaster. I wanted to get back in line to ride again, and I'm sure I will someday soon. Recommended, but very specifically. This won't be for everyone.