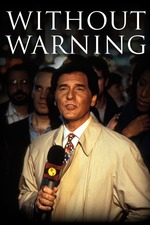 This is a Made-for-TV movie that can be considered as an early entry into the Found Footage genre. It was created in the spirit of the Orson Welles radio broadcast,"War of the Worlds".

This all begins with a slasher movie playing on network broadcast TV that is interrupted by a Special Report. Former real-life news anchor Sander Vanocur informs us that three meteors have struck the U.S., France and China. From this point on, "Without Warning" spins into a whirlwind of live on-location reports from the meteor strike sites, Nasa, the White House and many other locations.

Even though this movie is clearly operating with a low budget, it is very clever in the way that it uses its reporters and what they're witnessing to relay the total chaos of the strikes' events. In other words, if you're looking for spectacular footage of destruction, this movie isn't going to give it to you. But it does a fantastic job of relaying escalating horror on an evening of unimaginable frenzy. As a point of reference, this plays very much like the better known BBC faux-broadcast of a supernatural encounter in 1992's "Ghostwatch".

There are more ups and downs to be found in "Without Warning" than a day's worth of elevator rides in a skyscraper and if you want twists, this delivers them. I found myself more and more anxious and on edge as things spun out of control during the movie's 100 minute run time.

"Without Warning" is clearly not a masterwork of art and it certainly will not win any "best acting" awards, but it is a very effective thriller with a shocking ending.