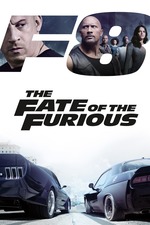 Of all the blockbuster vehicles in Hollywood, it continues to bamboozle how The Fast & the Furious series is still a regularly produced brand. From its meat headed roots as a supposedly earnest street racing action drama, around the fifth instalment the series underwent a rebuild that focused the narratives more toward that those of heist films, acting as platforms for a steadily escalating stream of action sequences and set pieces.

It should be noted that while Fast & Furious 8 (referred to in the States as the delightfully daffy The Fate of the Furious) is preposterously stupid – it’s also in on the joke. By this point, the series has devolved to such a point that it barely resembles the original model it was based on. Somehow descending frightfully successfully into a mounting parody of itself with each instalment – which has somehow worked out better for the series overall.

Fate takes the thematic foundations of family and throws a spanner in the works with an aggressively contrived plot point forcing Dominic Toretto (Vin Diesel) to work alongside cyberterrorist Cipher (Charlize Theron) in taking on his former friends in her nefarious schemes – and yet, these are the least contrived elements of the film on a character level.

To try and make sense of the adamant non-logic of this universe is a fool’s game. It’s brilliantly unnatural that the members of this surprisingly diverse team are being constantly brought in for secret government missions and heists – that could easily be dealt with by trained professionals – that can only seem to be accomplished through the use of fast cars and pyro techniques. The reasoning appears to be that if you can drive a car pretty well in this universe then you’re basically a superhero of varying ability dependent on the situation. Everything is inconsequential, but it lacks the strange emotional heft of Furious 7 as the void left by the late Paul Walker quietly lingers over the production.

The snowballing lunacy of the action sequences across the series continues to attempt to top itself in this instalment, and director F. Gary Gray makes decent use of the tools at his disposal here. While never quite as good looking as the efforts of the previous two directors and their staging, he shoots everything well even as it further detaches itself from reality with some of the silliest and most cheer-worthy moments in the series to date, keeping its extended runtime feeling short with pace. From a zombie car pileup and wire restraint fights in New York to shenanigans on the ice with a submarine and torpedoes, none of it is ever boring to watch.

The dynamics of the cast are still working, despite the overall quality of the character work the general vibe is still fun, although Vin Diesel still remains as ever the charisma vacuum of the group, to such an extent that every line of dialogue he speaks might as well be variations on his pronunciation of the word “family”. Theron is given little to do but has her moments as the new antagonist with a retconned connection to the overarching story.

Dwayne Johnson makes the most of his Agent Hobbs role given his limited but memorable presence in the last one, while Jason Statham’s transformation as the turncoat villain of the same film is absurd even by this series' standards. But he’s an enjoyable onscreen presence as always, delivering a jaw-dropping action sequence on a plane that defies all explanation as to its awesomeness in the film’s final stretch.

The Fast & Furious series understands its broad fan base as well as any leading franchise in the current blockbuster landscape; that through the increasingly long-winded narrative that is being stretched out, people are willing to forgive anything so long as they’re allowed to have a good time. To that end, yes, Fast & Furious 8 is a ridiculously good time. It’s foolish mindset and traits of music, aesthetic and dialogue are all present and accounted for and reliably glorious in its admirable quest to never acknowledge its own silliness, with all the money onscreen for the world to see. This is fast food cinema of reasonable quality that really isn’t good for you, but once in a while couldn’t hurt, right?