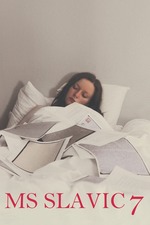 Five years ago after an internship in a literary archive, I stayed for another half year as a freelancer and indexed and catalogued the estate of an author we recently acquired, an estate which also included a box of love letters. As I was reading the correspondence, I found it impossible not to get attached to them emotionally - and at the same time it felt like a breach of trust. The letters are so naked, so vulnerable, the writer so urgent to lay bare his soul, but you are not the designated recipient of his feeling, merely eavesdropping on a conversation you are not privy to. MS Slavic 7 somehow gets this particular feeling and what it means to work with material as fragile as those thin letters. Granted, the positions are very much switched (as the literary executor, Audrey has a direct connection to the estate) and this particular struggle might be important to a very, very, very selective few but goddamn if this didn’t make an instant connection with me.

The film itself seems to be more interested in the process and the ways we organize ourselves around our history. It recalls touches of Chantal Akerman as Bohdanowicz’s protagonist seem to struggle with an issue, which feels incredibly existential to them but they have a hard time articulating. There are two touching and marvelously performed monologues in which Audrey (Deragh Campbell in a phenomenal performance) tries to formulate a thesis or an idea and almost gets there, but then loses her train of thought and gets increasingly more desperate.

This is also the point at which it should be mentioned that while the premise of the film (Bohdanowicz finding the letters of her great-grandmother in an archive) is autobiographical, the film plays in that comfort zone between fiction and documentary. Audrey is her own character with her own struggle of increasing cultural isolation. In fact, we very seldom see Audrey in a two shot. She’s mostly alone with the letters and the relationship she needs to decipher. The monologues are performed from a POV but until the last ten minutes we are not privy to whom this perspective belongs. Then we switch to a profile shot as Audrey finally brings herself to reach out and look for an answer. The translator reveals himself and he and Audrey start interchanging interpretations on what the letters could mean and Bohdanowicz opens up to a two-shot of them chatting, interacting, making a connection. Hard cut to them naked in bed reciting the letters to each other post-coitus. It’s a funny, sexy joke, but also feels incredibly real and urgent and never like a conceptual throwaway gag. This empathetic, humanistic undercurrent is the kind of virtue, I’ll always fall for these days.