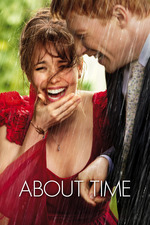 I was recently discussing with my mother what a phenomenal talent Domnhall Gleeson is and how incredible versatile I find him to be, to which she said, "oh! That's the guy from About Time."

"That stupid time travel romantic comedy?" I had remembered seeing a trailer for it and openly mocking it in the theater.

"It's not stupid- it looks like it is going to be, but then is actually very good. You should borrow my copy. I went out at and bought it because I needed to own it. I went and paid the full goddamn price. That's how good it is." This hearty recommendation, coupled with my burgeoning crush on Domnhall Gleeson, told me I should swallow my pride and watch it. The worst that could happen would be that I hated the movie and I could hold it over my mother. (It turns out the worst that did happen was my roommate came home unexpectedly and found me tearing up at a romantic comedy while wrapped in a blanket drinking tea. My masculinity was severely called into question, but I don't buy into typical ideals of masculinity anyways. I'm secure in being an emotional guy.)

The premise of About Time feels like a cheap rework of the classic Groundhog Day. This is a premise that works well across various genres (and has been proven to be a great concept for romantic comedy), and for the first act About Time feels like it will be wholly unoriginal and predictable: Tim, played with surprising nuance by Gleeson, discovers he has the power to travel back in time, but only in his own life. He decides to use this power to get a girlfriend. It seems like the film will, much like Groundhog Day, focus on this plucky hero trying to get the girl and get his life in order. But the pacing of the first act accelerates at breakneck speed and soon it becomes readily apparent that this is not the film you're expecting. It's never predictable, despite feeling like it should, and might be. It's a much better film than it has any right to be.

The ending is a bit overly sentimental as the narrative ties things together, and was disappointing though still satisfactory. The largest issue with it is the clash in tone; the sentiment contrasts rather sharply with the way About Time plays off what would typically be melodramatic scenes as lighthearted. Being lighthearted also seems to be the message at the core of the film, too, and the ending detracts from that in a misguided attempt at being more relatable or more easily digestible. There's a smaller "ending" earlier on that would have been an absolutely fantastic, if risky, way to wrap things up. About Time's unwillingness to take that risk is fairly indicative of the film as a whole; while very entertaining, it's all very safe and just a bit too comforting (which, to be fair, is part of why I loved it so much).

The largest issue with the film is that the whole love affair feels very problematic and a little self indulgent, a little too perfect with a shadow of troubling gender politics looming over it. Much like Groundhog Day, Tim uses his ability to manipulate time to also manipulate his way into convincing Mary, played by McAdams, to date him. When he first meets her, she has a boyfriend - he travels back in time to ensure that she never meets him. Expounding this stalker issue is the fact that he is completely dishonest with her about his abilities, and keeps them entirely secret. Their relationship is built off of a fundamental lack of openness and honesty - at least from him - and at times, this is a bit of a sticking point that brings the film crashing down. Fortunately, Gleeson and McAdams have enough chemistry together to salvage this flaw in the script and it becomes quite easy to overlook that Tim might actually be a bit of a psychopath.

Deeply flawed but with more than enough chemistry and charm to make up for it, About Time is yet another example of Gleeson's versatility and a romance that is sure to be added to my go-to recommendations.