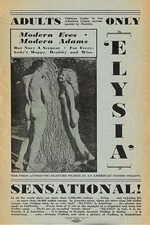 Elysia, Valley of the Nude

Will Sloan’s review published on Letterboxd:

"Our purpose is to show the benefits derived from bathing the body in the sun and air. We hope to show that the rapid growth of the nudist movement throughout the world is based on health - both of the body and mind." - Opening titles

This is the first nudist camp film, and as you can see, it is Very Serious About The Issue. The story involves a reporter who is assigned to write a story on Elysian Fields, a nudist camp in California. He is first shown some National Geographic-type footage of nude tribespeople to show that nudism is perfectly natural in most parts of the world, and unlike those less civilized countries, America's nudists seek to = both body and mind. (Don't shoot the messenger, folks, I'm just reporting what I saw). He arrives at the camp, undresses, and is led around by a doctor of some kind, watching the nudists play baseball, eat, frolic, etc. Much is said of how Nudism Is Perfectly Natural, and Elysian Fields is much more wholesome and moral than your average dance hall.

Our hero meets a blond girl towards the end, and folks, I'm not made of stone: I thought she was pretty cute. But aside from her, I didn't much enjoy looking at the bodies on display.

Jan-Gel, the Beast from the East