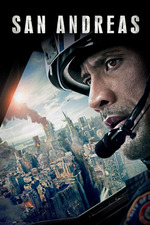 For a solid amount of time in the beginning, especially the scenes involving the seemingly unbreakable Paul Giamatti, who makes his way into almost every movie made in one way or another, I was satisfied with San Andreas. It was giving me just what I needed and wanted from a mediocre CGI disaster-fest starring The fuckin Rock. But after a while it gets somewhat tiresome and tedious unfortunately.

And Dwayne Johnson... god love him... I know I do, he seems to be a very genuine, kind, and down to earth guy... But calling his performance 'convincing' in this genuinely emotionally difficult role would be a stretch, I have to say. He works fine I guess, considering it's mostly just his job to be a badass motherfucker, and he definitely pulls that off with awesomely hunky grace.