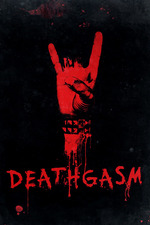 Deathgasm is a... Meh movie.

With a weak and convoluted story and poor direction, the movie saves itself with the funny skits and bits, some of which were really funny, and others that just passed by as too on the nose.

The film has a heavy edgy teenage vibe to it, and it was a little too much for my taste.

I found the first half of the movie way more interesting that the later one.

I think that with some better directing and thought put into it, this could be a good movie, even a great one, even with the non-sensical stuff.

Overall, Deathgasm is a welcome attempt on what it's trying to do, but for me it failed in some points.