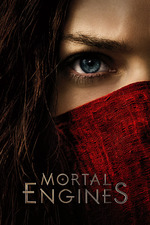 "It’s strange to think this is what it looked like."

Mortal Engines is a bland movie, it's one that i would love as a kid.

I find the concept of the film awesome, walking steampunk cities, that's amazing. But the movie does so little with that, it has a handful of cool action scenes, but the rest of it feels bland.

The story is whatever and predictable, the actors are monotonic, the directing is unninspired, the CGI is actually pretty good and the design of the cities are cool, but that doesn't save the movie.

The movie has awful jokes, and "funny" moments, the minions scene is specially bad.

I feel like this movie would work really good as a kids movie, but it takes itself to "dark" and seriously to work as one.

If it were more light toned and directed towards a younger demographic it would be a actually pretty nice movie.

As i said, as a kid i would love this movie, but as it's stand is a bland experience. It's not really bad nor good, it's just... Bland.