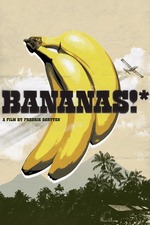 Fredrik Gertten's documentary BANANAS!* pits the working Nicaraguan worker against corporate behemoth Dole Fruit Company using LA-based personal injury attorney Juan Dominguez as their voice. Played as a traditional David versus Goliath story which includes plenty of too-late inspirational speeches, too many lingering courtroom footage scenes, and a small glimpse into the ethics and practices of this multi-national company in the 1970s - BANANAS!* never quite picks that perfect balanced fruit, leaving plenty of questions unanswered as faded to black in just under 90-minutes.

Do not get me wrong, I adore documentaries like this one. I'm certain that a stroll through your local grocery store would yield similar stories about the casualties of our favorite foods. Each would be unique and would inspire conversation and activism, however, BANANAS!* never quite excels in being more than just a traditional paint-by-numbers film. Gertten's struggle with this film is well documented (he even made a film called BIG BOYS GONE BANANAS which tells the story of how he was sued by Dole), and you can see that his passion for this specific subject is strong, but the end result is rather dull and uninspiring.

However, I did find Juan "Accidentes" Dominguez an interesting subject in this film. Behind the courtroom drama, there is a story about marketing. Throughout this film, Gertten doesn't forget to remind us that Dominguez understands the strength of a good billboard, the success of baiting a bigger fish, and rewards that follow (see the scene in which Dominguez talks about why a red Ferrari is better than a black one). You are often reminded that Dominguez is fighting for the common worker, BUT he subcontracts the work aside from his speeches via Radio Nicaragua. When an award is reached for those hurt by Dole's decision to continue to use a certain chemical, it doesn't come as a full cheer, as I thought about how much Dominguez may recoup to cover his costs.

As mentioned before, this is a David versus Goliath story, but instead of the two battling it out on the plantation, we use an attorney that near the end we learn may or may not have had the full heart of the community in mind.

In the end, the documentary provided plenty to discuss and I will think differently as I consider cutting a banana in my cereal.

Next, I plan on watching BIG BOYS GONE BANANAS as well as reading Dan Koeppel's BANANA: THE FATE OF THE FRUIT THE CHANGED THE WORLD.

Final Note: 1/3 of the price of bananas goes towards pesticides.