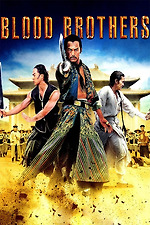 BLOOD BROTHERS is a seminal work in the canon of Shaw Brothers films, one of the best known and best loved pictures from Ti Lung and David Chiang's run as top stars of the studio, and the purest expression of the themes director Chang Cheh would choose to revisit throughout his career. This stands with 36TH CHAMBER OF SHAOLIN and THE FIVE DEADLY VENOMS as one of the essential films to watch from the so called "Kung Fu craze" of the early and mid 70's.

BLOOD BROTHERS is also a grand tragedy wherein an otherwise noble person is destroyed by virtue of a single fatal flaw that cannot be denied. It is an unusually sweeping and grand production for Shaw in this period: it boasts dozens of extras, extensive outdoor shooting, taking the film away from the studio bound hyper real feel of Cheng's early pictures like ONE ARMED SWORDSMAN and GOLDEN SWALLOW. This is an epic of brotherhood, sin, disgrace, and injustice.

The basic story is very simple but contains some unique flourishes: a criminal named Chang Wen Hsiang (David Chiang) is bright before the magistrate on the charge of the murder of a highly respected general, Ma Xinyi (Ti Lung). He recounts the story of the years leading up to the killing in court, as a noirish framing device. We learn that Chang and his martial brother, Huang Chang (Chen Kwan-Tai) befriended Ma when he was only a knight errant. Ma's incredible drive and ambition led them to greater success than they'd ever had, but it also aroused the hunger for power felt by Huang's wife Mi...

I don't want to spoil the whole arc but this square of relationships sets into motion the tragic downfall of everyone involved. There's a particularly excellent scene in the final third of the film, at the point of no return really, where Ma begins to try and justify his heinous course of action to Chang, overhears himself, and trails off... seemingly realizing that his desires are indefensible but undeniable. That's the very essence of tragedy at play.

The fights are all good for the period, if unremarkable, that follow the first rule of martial arts cinema though: Fights are there to PROGRESS the story, not REPLACE the story. As you would expect in a tragedy, the emotional intensity of the fights ramps up through the body of the picture which means that your best fights are all going to be at the end where tension between the characters has risen to the point where both of them cannot walk away from the fight alive.

There are some minor pacing quibbles and the character of Huang's wife really lacks the depth of the other three, seemingly incapable of real introspection, which is unfortunately recurring among this director's female leads, Cheng was reacting to a Hong Kong film industry that had been actress driven since it began and tried to shift to muscular stories about martial brotherhood. In retrospect, his work was perhaps an overreaction in this regard.

These are small things, though. BLOOD BROTHERS is a classic of old school kung fu, the kind of film that ends up getting sampled by the Wu Tang Clan. Make time to see it while it's streaming on Amazon Prime.