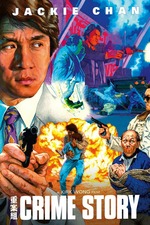 CRIME STORY is a tonal change of pace for Jackie Chan. This grounded, serious, dramatic, police thriller has the usual thrilling stunts and fights playing second fiddle to a duel of wits between Jackie and the film's conniving but clever villain.

The script, based on a true 1991 kidnapping in Hong Kong, was concieved as a vehicle for Jet Li. When filming ran long on ONCE UPON A TIME IN CHINA 3, Li was forced to drop out. The film might have been shelved altogether if not for the fact that the script had seen its way into the hands of Jackie Chan, who was looking for a different, more dramatic, vehicle at the time and liked it a lot. A quick rewrite later, and the film that had lost Asia's second biggest star had gotten its biggest to replace him.

Jackie plays Inspector Chan: a Major Case detective with HKPD shadowing a billionaire who believes he's going to be kidnapped. Sure enough, there's a conspiracy across three countries to take him hostage and squeeze 60 million US from his wife, led by another detective on Major Case: Inspector Hung played by Kent Chang, who absolutely steals the film.

Chang is probably the best villain in any Jackie Chan film: an overweight, underpaid, bully of a cop who is ably leading the kidnappers right under the noses of his superiors. Much of the top level suspense in the film is predicated on Hung trying to disrupt the police investigation without drawing suspicion, and it's very subtle and cerebral. This is definitely not a film that holds your hand through the plot.

That said, even though this is a change of pace for Jackie, the JC Stunt Team turn in a complete masterpiece: cars ramming motorcycles so hard they shatter into a thousand pieces, cars driving down mountains, falls through piping, neon signs, bamboo scaffolding, glass, fight scenes that demand your full attention, you will not be bored during CRIME STORY.

Kirk Wong was one of Hong Kong's very next directors in the 90's and watching this film back to back with Jackie's own POLICE STORY is illuminating as to what he's bringing to the table: whereas Jackie shoots for compositional clarity and simplicity to allow complicated fights and gags to be clearly understood, Wong is reminiscent of an early Tony Scott here: dolly shots, cranes, handhelds, high contrast lighting with smoke effects, muted colors. This is definitely a film that evokes the style of something like LETHAL WEAPON. Just goes to show that there's more than one way to show Jackie working on all cylinders.