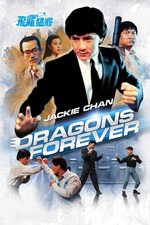 DRAGONS FOREVER is a lot of things at once:

- The final full collaboration between its stars, the "Three Dragons": Jackie Chan, Sammo Hung, and Yuen Biao, and therefore the culmination of a working relationship between these three men that had begun when they were children in the same Peking Opera troupe.

- A bold departure from the themes and personas that had made these men so famous. DRAGONS FOREVER plays like a conscious attempt to "dirty up" Jackie and Yuen, presenting them as a seducer and a madman respectively and counting on their natural charisma to get the audience in their corner anyway.

- A troubled production, that sharply divided ak three of the principals involved in terms of tone and execution and is the largest proximate cause for their not having worked together again in the same capacity.

- Home to some of the very best fight scenes and sight gags Sammo has ever put together. The fights are lightning fast, high impact affairs that show off the very best of Hong Kong choreography at that time.

Jackie plays a lawyer who uses Sammo and Yuen to help him spy on the owner of a local fishery that's suing his client, a factory owner. Sammo falls for the fishery owner, Jackie for her cousin, an environmental expert which complicates the process exponentially. When it turns out the factory is producing narcotics they switch sides and attack the gang head on.

In general in these films, the plots work best as frames for the set pieces: it's nice if they're sturdy but really, you just don't want them getting in the way. This film definitely has some stand out sequences: two three-way fights between Jackie, Sammo, and Yuen that are marvelous; a long sequence where Jackie has to hide Sammo and Yuen from the girl he's seeing in his apartment; the finale in the factory. I did feel, however, like the mechanics of the plot were getting in the way of just being able to enjoy the guys doing their thing.

I also felt that perhaps Jackie and Yuen were playing so far out of type (Sammo is ultimately playing a variation on other characters he's done in the past) that it made it harder to root for him than it should. An early fight sequence where Jackie is thrilling in fighting off a group of thugs trying to bully a witness is bookended with him trying to bribe that witness into a settlement and slapping her in the face when she thinks he's in cahoots with the bad guys. I'll never take a filmmaker to task for switching things up, but this feels like they didn't stick the landing to me.