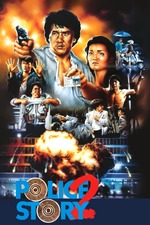 One blink-and-you'll-miss-it moment encapsulates the embarrassment of riches that is POLICE STORY 2's stunt work.

Ka-Kui (Jackie Chan) has just rushed to his girlfriend's (Maggie Cheung) house after she was threatened by a group of thugs looking to get revenge on him. While he's there, he gets a call from the dregs informing him they're waiting for him across the street at a small restaurant. He leaps into action, crossing a massive, multi-lane, highway with oncoming traffic. As he bounds over the last concrete median, he's struck by a kei van that speeds into frame doing at least 30 miles an hour full on. He bounces off, gives the van half a look, and continues, all in one medium shot.

Chan, the director and star, asked his stunt team to hit him head on with a van at speed so they'd have a fun little beat before a major action sequence. He's just on another level at this point.

POLICE STORY 2 is an interesting picture to consider in relation to its predecessor. First of all, the narrative canvas is much bigger: this time out Jackie must not only deal with the remnants of the first film's gang, but also a gang of professional terrorists using explosives to extort a major Cantonese corporation. The laser focus of the first film is replaced by a slower, more dramatic pace. Nearly a half hour longer than the first film, POLICE STORY 2 is given a little more room to breathe.

The stunt work has not only been further refined, it's been given new spice with the introduction of full, professional, pyrotechnic effects which were a first for Hong Kong action films. The fights here feel faster, tighter, more brutal. There's a fight between Jackie and a deaf-mute character that is likely the fastest striking I've ever seen in a motion picture, almost to the point of blurring out. There are, somehow, even more dangerous falls from second story windows and off of buses. There's a standout sequence where Jackie evades over hanging signs while riding on the top of a moving bus that is just breathtaking. I would also say that Maggie Cheung's character is far better used here; she's no longer the source of punch lines but feels like a real person who you understand why Jackie's character loves.

So with all that, why is the first film better?

The added run time doesn't help the picture, and in fact, this film contains a long dead zone in its third act where Jackie's trying to play for pathos that isn't there. As great as the stunt sequences are technically, I don't think any one of them compares favorably to the double-decker bus or the shopping mall from Part 1. Don't get it twisted, what's here is amazing, but it's not as well paced or as strikingly original. The fights, until the finale, also lack the decisive punch of the first film's. This marks the beginning of Jackie's trend following ARMOR OF GOD to be less and less outwardly violent, and for his films to focus more and more of the violence on him. That said, there's still a little of the old mean streak at play in a sequence involving fireworks and the human body. I would say this one's about 85% of what the first film is.

That makes it an easy candidate for recommendation, though. Prime Jackie Chan.