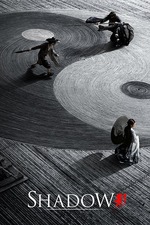 SHADOW is the NOTORIOUS of wuxia pictures. It's a visual masterpiece, a ruthless court drama, a story of divided hearts and fractured loyalties. It is the most complete film of the four historical action pictures Yimou has done.

Set during a thinly veiled renaming of the Three Kingdoms War at the end of the Han Dynasty, SHADOW concerns a great commander who disobeys his King in an effort to steal a key city from a long time rival kingdom under treaty. As the story progresses, we discover that Commander Ziyu is not what he appears to be.

Long ago, Ziyu noted a peasant boy who strongly resembled him and over the course of years trained him to act as his double, or "shadow". After a duel with the rival kingdom's General Yang, he was horribly wounded and rather than accept his condition, he has moved into the shadows and attempts to manipulate the personalities at court through his shadow, including his increasingly conflicted wife...

The film is absolutely stunning: using monochrome sets, color muting, and limiting costumes to black and white Yimou crafts an entirely distinctive and oppressive mood of paranoia, loss, and dread. This is coupled with set design that incorporates semi transparent barriers of calligraphy and iconography, which gives the scenes at court the wonderful visual metaphor of hiding behind words and false faces.

The pace reminds me more than a little of Takeshi Miike's 13 ASSASSINS where all action is building towards a final climactic action sequence. This film, appropriately enough, has both a truly epic battle sequence and a smaller, intimate, finale that acts as an emotional climax: a huge battle casting a small, but deadly shadow.

Highly recommended. An excellent blend of intrigue and action.