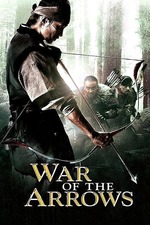 War of the Arrows

WAR OF ARROWS represents the first serious disappointment I've felt since once more charging unto the breach of Asian action cinema. Don't get me wrong, it's a fine film with an exciting premise and a couple very memorable sequences, but it's all wrapped up in a contrived, flabby, and melodramatic backstory that makes the first hour a slog.

Directed by rising star Kim Han-Min (the similarly idiosyncratic THE ADMIRAL: ROARING CURRENTS), WAR OF THE ARROWS is a period action drama with a twist it wears on its sleeve: the combat scenes are rooted in archery, not swordplay, giving them the feel of a sniper film. Flashy acrobatics and choreography are replaced by suspenseful duels along the mountains and forests, moving in and out of cover, trying to pick off opponents without giving away your position.

It's an intriguing premise, and the few sequences that follow this formula feel like no other period action film I've ever seen before but, unfortunately, the movie has far less time for them than you would like.

The plot revolves around a brother and sister whose noble father is wrongfully accused of treason and killed by the government. The boy, much older, leads his younger sister to the castle of his father's closest friend, who agrees to raise the children alongside his own son.

Some fifteen years later, the boy has grown into a malcontent who quarrels with his adopted father and refuses to apply himself to anything more than hunting with his father's treasured bow. When Manchurian raiders attack the wedding of his sister and step brother, he's forced into action in order to rescue what remains of his family.

Credit to what I like here: the Manchurian villains are truly evil here. Their initial raid, somewhat reminiscent of John Milius' CONAN THE BARBARIAN, is punctuated by a random horseman throwing a baby down a well for no reason. I also really enjoy the performance of Ryu Seong-Reong as a Manchurian commander who slowly comes to realize how dangerous the Korean archer is.

What left me cold was Park Hae-il (MEMORIES OF MURDER) in the lead role. This is pretty shocking to me because he won the Korean equivalent to Best Actor for this role and I was really expecting to be blown away, as I have loved everything I've seen of his to this point. In this picture, I really felt like he was playing a stock character. I can't remember a single scene of his here that really jumped out to me or that I can hang the film's hat on.

The family drama dominates the first half of the film and it just didn't resonate with me. I'd felt like I had seen this same character more fully realized in films like FONG SAI YUK and DRUNKEN MASTER II.

The second hour picks up, especially when the Jurchen Lord and Park's sister begin to contend with one another and Park steps in for some payback. The final action sequences are well shot and come close to realizing the promise of the film's premise.

Not a bad film, but definitely not on the level of the Korean classics I've been reviewing.

Fighter in the Wind

The Fate of Lee Khan