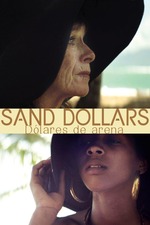 I'm covering some of the films playing at AFI's Latin American Film Festival over the next few weeks for redcarpetcrash.com. Here, I take a look at Sand Dollars, the opening night film, which I really liked.

It's a quiet one and almost suspicious of the beauty of its setting. Maybe some would consider it a bit overly "festival-y" in style and tone, but I think it undercuts some of the expectations of festival films, and, anyway, I admired its unwillingness to simplify its characters and Chaplin's and Mojica's terrific performances.