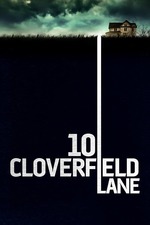 I've been anticipating a follow up to Cloverfield for so long and I finally watched it. Which is a weird thing to say, considering I remember years ago researching this movie, reading all those crazy fan theories and even watching a video on YouTube where you can see something fall from the sky and into the water in the background of one of the scenes. I was obsessed with it. So, I was pretty excited when that trailer dropped out of nowhere.

Anyways, enough of that crap and actually onto my thoughts....I had a really fun time with this. I thought Green Room was going to be the most tense film I've seen all year but man this was pretty damn close. It's set up perfectly and manages to maintain its grip throughout the entirety of its runtime. This film did a really great job at fucking with your head. I didn't really know what to expect or what was going to happen throughout this film. Just when I thought I had a grasp on it, it reveals another detail and that grip was lost. All the time spent in the bomb shelter, I loved and enjoyed the hell out of it. It was riveting, engaging and so interesting. It also helps, that I was drawn to all the central characters. Who had surprisingly more depth then I thought they would. For the most part, I forgot this was even a Cloverfield film and there was going to be a sci fi twist in the end.

Getting to that, honestly, even though this isn't a direct sequel to Cloverfield, I still expected a bigger reveal instead of just a space ship and a little alien dog creature. But I definitely didn't expect an entire alien invasion to be happening! It was a little disappointing and why I didn't rate this higher. But that entire sequence, was so damn thrilling and the transition was amazing.

Even though this one doesn't have anything to do with Cloverfield, I still loved the direction they took with this film and hopefully we can get more like this.