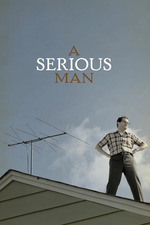 About halfway through the Coen brother's new movie, there's a shot of hapless physics professor Larry Gopnik (Michael Stuhlbarg) standing in front of his class. He is a tiny figure at the bottom of the frame, nearly consumed by a comically oversized chalkboard covered the obscure equations that constitute the mathematical proof for Heisenberg's Uncertainty Principle. You know the Coens are in the mood to grapple with the absurdity and loneliness of existence when they reference Heisenberg. In A Serious Man, this image encapsulates Gopnik's internal crisis, whose life is rapidly unraveling and who can't figure out why. In the frame, he's practically being crushed by a vast expanse of complex, inscrutable equations, all of which add up to one big question mark. Most of the film consists of Gopnik suffering various travails and his attempting to make sense of what is happening to him. In his struggle, Gopnik has two coping tools at his disposal: his understanding of the explanatory power of science, and his Jewish faith. These are two twin intellectual pillars of Gopnik's life, but once his trials begin, he discovers how shaky they really are. The mystical nature of quantum mechanics undermine any ability to trust conventional cause-and-effect reasoning. Even more troubling to Gopnik, Judaism doesn't offer much in the way of comfort. The film is organized around Gopnik's discussions with three separate rabbis at his synagogue. The rabbis attempt to offer solace, but what they cannot offer is any sort of explanation for Gopnik's plight. Unique among Western religions, Judaism embraces the essential mystery of the universe, which doesn't give Gopnik much comfort when it seems that the universe is conspiring against him.

Superficially, this is the Coen brother's most personal film: it's setting (the Twin cities) and period (the late 1960s) are the setting and period of their childhood, and their protagonist is modeled on their college professor father. But there is little in the way of personal frankness on display here: this is the most intentionally obscure, cerebral Coen movie since Barton Fink. Given the theme of struggling with the unknowable emptiness of existence, it's appropriate, but at the same time it's hard not to feel a sense of deja vu. A Serious Man trodes much of the same ground of not only Barton Fink but also of their vastly underrated Man Who Wasn't There. The only real innovation, and it's admittedly a dozy, is the immersion in Jewish lore and theology. For those interested in Judaism, A Serious Man offers an arresting glimpse into a religion that concentrates much more on the social and traditional than on questions of "belief," and how this stance can leave people in crisis with more questions than answers.

Larry Gopnik joins a small group of Coen protagonists which includes Marge Gunderson, and Ed Crane, who are not appallingly venal and/or stupid. He is heaped with a slew of baffling personal problems, from his wife's bolt-from-the-blue divorce demand to his socially retarded brother's legal troubles to a Schrodingerian Korean student who may (or may not!) be trying to bribe him for a passing grade. His troubles are, of course, played for laughs, but they also offer a platform to explore the spiritual collapse of a person who reaches for a rope to save himself from drowning only to discover that it's made of sand. There's no catharsis and no redemption, just a steady descent to the bottom of the ocean. A Serious Man offers the usual bracing jolt of a Coen brothers movie, but once again, the brothers have opted not to provide much in the way of solace: life is a bewildering minefield of absurdity and humiliation, and nobody, not G-d, not Einstein, and least of all some smart-aleck filmmaker, can make it okay.