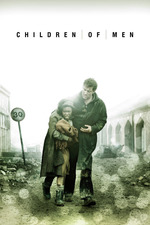 Alfonso Cuaron has managed to make a kind of movie that I have never seen before: a deeply political film that somehow avoids clunky exposition, rousing speeches, or other agenda-laden, uncinematic elements that detract from the storytelling. The film accomplishes this by an ingenious one-two manuever. It creates a fully-realized future earth, in which the horrors of the present day, from America's imperial jackbootery to general third world strife and privation, have moved from the periphery of the Western world to the center. Bombs exploded in coffee shops, detainees huddle in cages on train platforms while soldiers scream for passersby to look away, refugee camps teem with fanaticism, despair and violence. It's everything that makes us change the channel when we see it on television. The viewer is fully immersed in this nightmare world, reminded by the plot that they're watching a fiction, but reminded by the nature of the nightmare that it's a fiction only for those of us in the first world. Cuaron identifies the issues he seeks to address (aformentioned American imperial jackbootery and the death-by-neglect of the global south) by the details he highlights in his dystopia. That's par for the course in thoughtful science fiction. What makes Cuaron's film uniquely political while remaining intensely cinematic is that he makes his incitement to action, always the clunkiest part of any film with an agenda, transparent by immersing it within the character arc of the protagonist.

Theo Faron (Clive Owen) is a jaded bureaucrat, a cog in the authoritarian machine that holds Britian together by force during a slow motion apocalypse brought about by world-wide infertility that has lasted eighteen years. He is a former activist who has had the idealism beaten out of him by personal tragedy and the unrelenting slide of humanity into red-clawed self-destruction and is now content to drink himself into oblivion and watch the world fall apart. A former lover played by Julianne Moore, who never lost her committment to radicalism, comes back into his life with a favor to ask, and begins drawing Theo out. First, his emotions are reawakened, in joyful and painful fashion. Later, those emotions spread outside of Theo's control, reaching outside of Theo, beyond the immediate circle of his loved ones, out to touch all of humanity. This new-found humanism pushes Theo to risk his life for something bigger than himself.

It's a fairly standard character arc: cynical bastard learns to believe again. Call it the Casablanca. What makes its use in Children of Men uniquely powerful is that it isn't simply the story of the cynical bastard. The cynical bastard is the audience-member. The horrors of the fictional dystopia are the horrors of the world around us. And the moral choice that Theo makes is the same one that Cuaron insists that we all confront: to accept the shared humanity of all the people of the world, or continue living a closed, hopeless existence. The film's climax is a jaw-dropping sequence in a refugee camp, filmed in a single, continuous shot as Theo and his companions attempt to escape a harrowing battle between refugees and soldiers. They are frail and vulnerable, caught between the hammer and tongs of state violence and desperate fanaticism. The extended single take has a dual effect. On a purely cinematic level, it gives the scene a sense of panoramic realism and unrelenting tension, like a hand slowly closing around the viewer's throat. With no cuts, no montage, there's no time to breath. Thematically, the shot serves to compress the viewer's identification with Theo to the point of a singularity. After watching the whole scene from a perch just over Theo's shoulder, there's no way for the viewr to seperate from the character. And so, by cinematic identification, Theo's awakening becomes the viewers awakening, Theo's dilemma becomes the viewers dilemma, and his choice becomes the viewers choice.

The one consistent criticism I've heard levied at Children of Men is that the goal Theo moves towards over the course of the film, smuggling a woman out of the country and onto a waiting boat, is vague and ill-explained. But the vagueness of Theo's goal is not just a piece of lazy plotting, it's crucial to the film's themes. Theo's mission is a metaphor for the challenge facing the first world citizen. Like Theo, we live in a world of inhumanity and injustice right outside our doors, like Theo we retreat from our responsiblities for this in cynicism. We point out that, while things are fucked up, there's no clear way to unfuck them. If the audience is meant to identify with Theo, they must also identify with his dilemma: why stick your neck out and risk your comfort or even your life fighting for a goal that you can't see and have no reason to believe will succeed? Were solutions to world problems readily apparent, there would be no excuse for inaction. In the film, Theo's cynicism is eventually overwhelmed by his awakening humanity and he pushes forward into a dangerous unknown, his only reassurance that he is acting for the right reasons. That is the sentiment that lingers as the film ends: lack of clear alternatives to injustice is not a justification for allowing injustice to continue unopposed. Not if you value humanity at least.