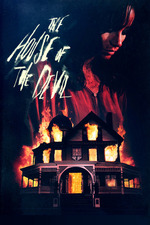 Writer-director Ti Law's retro-horror film The House of the Devil plays like the third part of Grindhouse. Actually, it plays like an actual "grindhouse" 80s horror film, as opposed to the mimetic subversions of Robert Rodriguez and Quentin Tarantino. There's no gratuitous nudity and a relative dearth of blood, but The House of the Devil positively drips with period detail and boasts a visual pallet instantly recognizable to anyone who spent sleepless nights during the Reagan administration watching co-eds get slaughtered.

The period detail goes beyond rotary phones and high-waisted jeans; House boasts a plot featuring one of the great boogeymen of the 1980s: the Satanic cult. A young college student looking for rent money takes a one-night, high-profit "babysitting" gig at a scary old house in the country that just so happens to be the base of operations for a family of be-robed Satan worshipers. The vast majority of the film consists of the young woman, played by Jocelin Donahue, walking from room to room in the big, creepy house, accompanied by a needling, pensive score. These long stretches of anticipation work wonderfully at creating suspense as the audience waits...and waits...and waits for something to happen; the waiting never slides into tedium because the sense of imminent, horrifying danger never slackens. Law achieves this effect with all the tools in horror directing kit, voyeuristic shots, as well as extreme low and high angles that highlights Donahue's vulnerability. More interestingly, Law repeatedly holds a shot of an empty room or space after a character has walked out of the frame. That use of negative space puts the viewer further on edge as they wait for something to fill it. Then, the tension explodes in a bloody, hysterical climax that ends with a nice, Twilight Zone-worthy sting.

While The House of the Devil works as a piece of sustained tension and bloody supernatural horror, that doesn't address whether the 80s trappings are strictly necessary. Perhaps not strictly, but there is something about the grimy aesthetic of 80s horror films that gives them a nasty edge that slick, big-budget contemporary horror films simply can't match. Watching underwear models and the third lead from One Tree Hill get chased by a killer on glossy film stock can be entertaining, but it rarely scares. Ti Law and company keep the visuals and constraining reality of 80s horror (a scary old house is a lot scarier when you don't have a cellphone), jettison the ugly misogyny and cheap shocks while pushing a sustained sense of doom to riveting lengths.