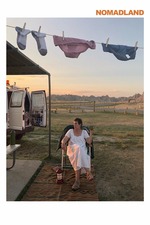 Chloé Zhao is a dynamite talent, and that’s absolutely clear during every shot of Nomadland. This was also impossible for me not to compare it (somewhat unfavorably) with her last feature, The Rider. Zhao takes the same approach here as she did with her last film: a striking blend of fiction and documentary that explores a character whose subsection of rural America has left them to rot.

But this time, as transcendent as Frances McDormand is, the naturalism can’t help feel a little less convincing. It’s unfair to expect Frances to compare to the absolutely miraculous performance that anchored Zhao’s previous film. She’s an actor, and he, in the end, was doing something more than acting. Something that gave viewers a glimpse into so much genuine pain and trauma that it almost felt inappropriate.

Nomadland is still a very, very good movie. One that explores and challenges the alternatives Americans are left with when capitalism fails them on an abject level. It’s difficult for any director to capture lightning in a bottle twice, and in the end, it’s hard not to remember that the hell Zhao puts us through this time is of her own creation.